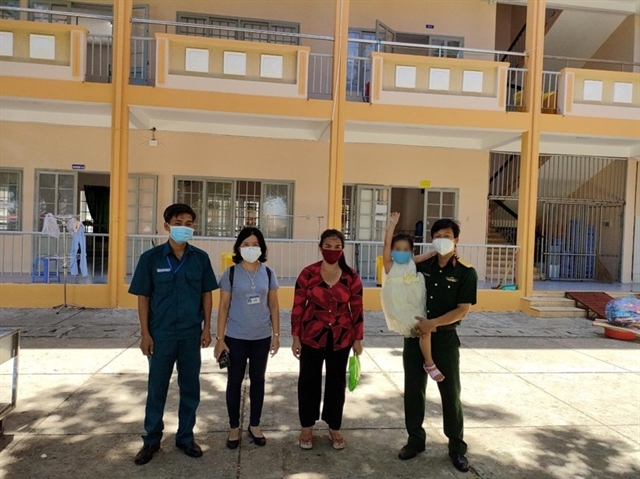 Kiên said he felt extreme sorrow when the four-year-old girl welcomed him as he brought the ashes of her mother, who died of COVID-19, to the woman's rented room in the city's Tân Phú Ward on August 8.

The four-year-old girl, named Phạm Thị Bảo Châu, was the only known relative of the woman, Kiên said.

"I was very surprised and sadden that she was the only relative of the woman at that time," Kiên said.

"When I saw her naively touch her mother's ash box, as a father of two children, it was a heartbreaking moment,” he added.

Kiên said he found Châu living alone in the rented room. Neighbours, who were also infected with COVID-19 and were self-monitoring at home, took care of Châu when her mother was being treated at the local hospital.

After Kiên heard that Châu's deceased mother earned a living as a scrap collector to raise Châu, Kiên proposed to his superiors to bring the ashes of Châu's mother back to the command and contacted the ward's quarantined area to bring Châu in too.

"Talking with Châu every day, I feel such pity for her situation as an orphan," he said.

Kiên said he discussed with his wife and decided to become Châu's adoptive father.

He said, "When Châu stayed at the quarantine area, I searched for Châu's relatives."

Kiên said it took time to find Châu's relatives because he had very little information about Châu.

He found a biological aunt of Châu named Phạm Thị Diệu, who lives in Thắng Tam Ward, Vũng Tàu City in the southern province of Bà Rịa – Vũng Tàu after dozens of days of seeking.

After talking to Kiên, Diệu said she wanted to receive the ashes of Châu's mother and bring Châu to live with her in Vũng Tàu City.

Diệu also said Châu had an older brother and an older sister. The brother and sister were living with an 87-year-old grandmother in Ward 4, District 8, HCM City.

Kiên said he took Châu to Diệu to raise on September 4.

Kiên continued to seek the address of Châu's grandmother. After a week, Kiên took Châu to see her grandmother, sister and brother.

Châu's older sister and brother live with the grandmother and a disabled aunt in a 12.5-sq.m house with a broken roof.

Châu's older brother is 10-year-old and her sister is 8-year-old.

Kiên talked with his wife again and the couple agreed to become the adoptive parents of Châu's older sister and brother too.

Kiên bought old computers, notebooks and textbooks for them to learn online. He also contacted teachers to discuss the children's learning activities, he said.

Kiên said he is calling on kind-hearted people to donate to the repair of the house of Châu's grandmother and to bring Châu to live with her older sister and brother.

He and his wife would support the grandmother to raise the children.

Kiên is not only a man with a warm heart but also a good example of the spirit of initiative and passion for scientific research.

Since 2016, he has produced about 20 innovations to improve the quality of his work, including a robot to spray chemicals to disinfect vehicles, preventing the spread of COVID-19 in 2020.

Kiên was recently honoured as an example in the COVID-19 prevention and control on October 14 by the High Command of Military Region 7.

Kiên said, "I wish all orphan children, especially, children orphaned by the COVID-19 pandemic, to receive love and care from relatives, school and the whole society so that they could live with love and become good citizens in the future."

Soldier adopts three children orphaned by COVID-19 have 1054 words, post on vietnamnews.vn at October 20, 2021. This is cached page on Talk Vietnam. If you want remove this page, please contact us.