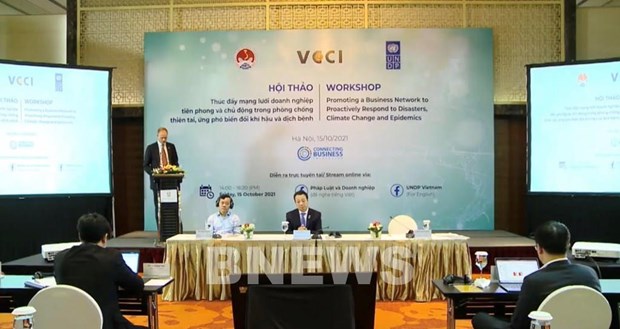 Hanoi (VNA) – A seminar on promoting the involvement of pioneering enterprises in natural disaster prevention and control, and response to climate change and epidemics was held in Hanoi on October 15.

Co-organised by the Vietnam Chamber of Commerce and Industry , the United Nations Development Programme (UNDP) and the Ministry of Agriculture and Rural Development's Vietnam Disaster Management Authority (VNDMA), the event aimed to respond to International Day for Disaster Risk Reduction (October 13) in order to review the impacts of natural disasters, climate change and epidemics on Vietnamese businesses, as well as policy impacts on the role of enterprises in the field.

In his opening speech, Deputy Resident Representative of UNDP in Vietnam Partrick Haveman said UNDP together with relevant agencies have encouraged technical working and research groups, organisations and business associations to acquire new initiatives to help businesses improve their resilience to shocks like COVID-19 and mitigate the impacts of disasters and epidemics.

Citing the World Bank's report on the role of the Vietnamese firms in disaster prevention and climate change response , Head of the VCCI's Legal Affairs Department Dau Anh Tuan said Vietnam is one of the countries hardest hit by extreme weather. Economic losses caused by natural disasters could amount to nearly 1.5 percent of its annual gross domestic product and could keep rising in the future, he said.

Agriculture suffers the most consequences of natural disasters while newly-established firms are also the most vulnerable to climate change. However, due to the COVID-19 pandemic, up to 71 percent of companies reported year-on-year decline in revenues this year, Tuan said.

According to the official, 63 percent of joint ventures and 49 percent of foreign-invested enterprises have actively joined in efforts to overcome consequences caused by natural disasters. Therefore, the building of a national strategy on disaster prevention and control as well as the role of business community is needed at present.

VNDMA Deputy General Director Nguyen Van Tien said Vietnam has been one of the five countries hardest hit by climate change over the past three decades. Each year, natural disasters leave about 400 dead and missing and cause economic losses of 1-1.5 percent of the GDP.

Seminar seeks to improve firms’ role in climate change response have 565 words, post on en.vietnamplus.vn at October 15, 2021. This is cached page on Talk Vietnam. If you want remove this page, please contact us.