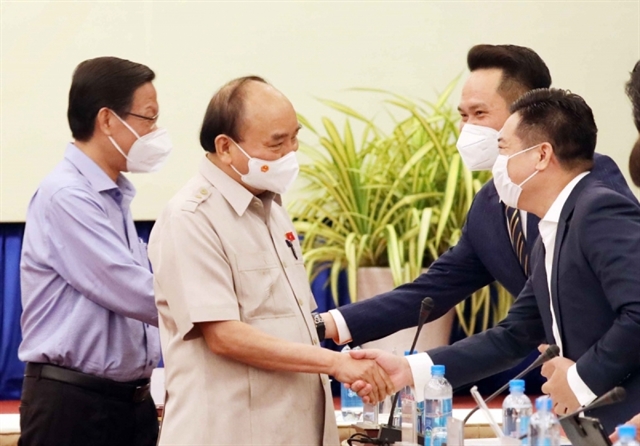 The president spoke at a meeting with representatives from more than 10,000 businesses belonging to the Việt Nam Young Entrepreneurs Association in HCM City on the occasion of the Việt Nam Entrepreneurs' Day (October 13).

He spoke highly of the young Vietnamese entrepreneurs for their efforts offered to vulnerable people in areas most affected by the outbreak.

"I'd like to extend my gratitude to all Vietnamese entrepreneurs, business organisations and associations which play a major role in the country's economy."

More than 100,000 enterprises stopped production, including some 16,000 enterprises in the city which have ceased operation, have been dissolved or have gone bankrupt, according to Phúc.

"This problem has seriously affected the city's employment, revenue, budget, and social security.

"Enterprises are the backbone of the country," he said. "Every business has its own challenges, but I do believe they can all overcome them. They do need to have a strong belief and should never lose faith."

Phúc said the government will listen to all the recommendations for implementation of numerous policies to support the economy.

Phúc said it was of paramount importance for the city to focus on the both domestic and export market as well as public investment.

Also speaking at the event, Phan Văn Mãi, chairman of HCM City People's Committee, said the city would complete an economic recovery plan for the rest of the year and for 2022, stressing the major roles to be played by businesses and each resident in pandemic prevention and economic recovery.

"The city will work closely with the business community to discuss policies to remove their difficulties."

In addition, a number of delayed projects, mostly key traffic projects, will resume this month, according to Mãi.

Mãi proposed that the National Assembly and the central Government focus on major production and services, especially small and medium enterprises, to help them resume production as soon as possible.

Đặng Hồng Anh, chairman of the Việt Nam Young Entrepreneurs Association, said that most businesses and entrepreneurs, especially small and medium enterprises and start-ups, were greatly affected by the fourth wave of the outbreak.

The business community wants to have support policies in the long run, especially in administrative reform, to level the playing field for all and to improve efficiency and transparency, according to Anh.

"An open, public, transparent and fair mechanism is needed."

President Phúc encourages young entrepreneurs to overcome hurdles caused by pandemic have 672 words, post on vietnamnews.vn at October 13, 2021. This is cached page on Talk Vietnam. If you want remove this page, please contact us.