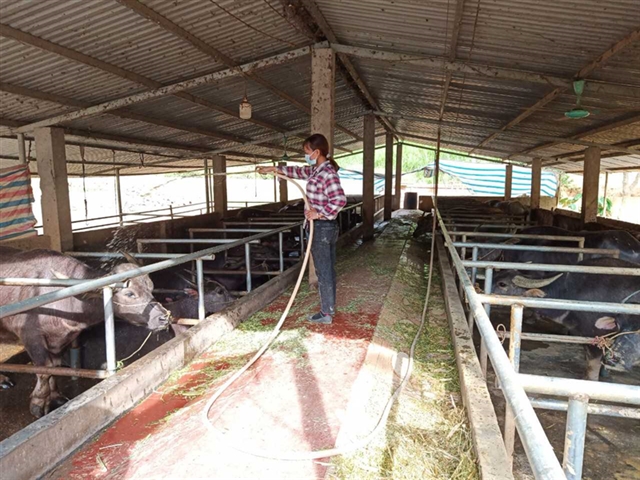 LÀO CAI — Nguyễn Thị Hà, 39, is a female farmer from Bản Lầu Commune in the mountainous province of Lào Cai. She would be a typical example of a poor female farmer from the province, but she has successfully started up her own business that has helped her escape the clutches of poverty.

Hà is now the owner of a farm with 76 buffaloes, 50 goats, hundreds of poultry and 17 pigs. She also plants two-hectares of cinnamon, tea, 1,200 jackfruit trees and 5,000 banana trees. The entrepreneurial Hà also runs a shop that supplies fertiliser to local residents.

She said she earned a profit of about VNĐ2 billion (US$88,000) each year, thanks to the Thịnh Phát Co-operative she and her husband set up in the commune in 2016.

Hardworking from the off

Hà was born to a poor family in 1982. Her parents struggled to earn a sustainable living through farming.

After getting married, she realised that the income from growing rice and corn was not enough to raise her children, she said. She thought of how to escape poverty for a long time.

In 2008, when the province administration issued policies in support of local farmers, Hà decided to borrow VNĐ30 million ($1,322) from the Việt Nam Bank for Social Policies, to buy buffaloes and pigs.

At first, she met many difficulties, including how to raise, feed and keep her herd of buffalo and pigs healthy, but thanks to her training courses she gradually overcame the difficulties.

Her buffaloes grazed on the hills and ate natural plants, meaning the quality of her meat was better than buffaloes raised on farms. She was not always about to meet the demand for her meat.

After her initial success from raising buffaloes and pigs, Hà continued to borrow money from the bank to buy land to raise cinnamon, tea, jackfruit and banana in 2014.

In 2016, she and her husband set up Thịnh Phát Co-operative and a shop to provide fertiliser for local farmers.

Nông Thị Nghì, Chairwoman of the Women’s Union in the commune, said Hà had also tried to support other poor female farmers in the commune to escape from poverty over the past years.

Seven poor local female farmers had borrowed around VNĐ10-20 million ($441-882) from Hà so far, without interest. Hà also shared her experiences in escaping poverty with women in the commune, Nghì said.

Lù Thị Lan, of Na Mạ Village, said Hà offered her a job as a tea picker in Hà's tea farm, with a monthly salary of VNĐ8 million ($352). This job was offered when Hà heard how Lan was struggling to earn living and raise her children.

"I'm so grateful for that," Lan said.

Thanks to the income as a tea picker, Lan could raise her children and stabilise her daily life, she said.

In 2018, Hà lent local farmers more than 2,000 tonnes of fertiliser to grow pineapples. However, due to the COVID-19 pandemic, the farmers had yet to pay the money back to Hà, Nghì said.

Hà extended the time to pay the money back and continued providing fertiliser for the farmers.

Hà has received a certificate of merit from the provincial Women's Union for her outstanding achievements in the "Lào Cai Women start-up" in 2020.

Also in 2020, Thịnh Phong Co-operative was awarded a certificate for being an outstanding example in the province between 2016-2020.

Hà said, "I always thought that if I work hard enough, I could change my life." —  VNS

Poor female farmer helping other escape poverty through business entrepreneurship have 826 words, post on vietnamnews.vn at October 20, 2021. This is cached page on Talk Vietnam. If you want remove this page, please contact us.