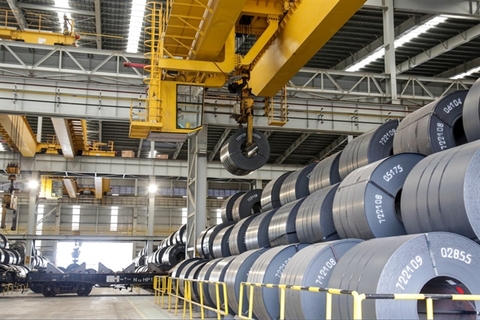 Even though the VN-Index has not yet surpassed the psychological level of 1,400 points, the market was still considered positive last week. The uptrend reappeared in many stock groups, with increases in liquidity.

Analysts from securities companies are quite optimistic about the market this week as their expectations on rallies have not changed.

Both benchmarks recorded a weekly gain, with the VN-Index up 1.45 per cent and HNX-Index up 3.47 per cent.

The liquidity rose compared to the previous week and was higher than the 20-day moving average, with about VND24.1 trillion (US$1.1 billion) traded per session on the two exchanges.

Vietcombank Securities Company (VCBS) said that the VN-Index recorded a positive week after successfully surpassing the resistance level of 1,380 points while the trading volume of the week remained at a high level. The index’s gaining momentum was led by bank and financial stocks, and large-cap stocks like Hoa Phat (HPG), Vinhomes (VHM), Vingroup (VIC), and Vincome Retail (VRE).

After surging above 1,390 points in the first session of last week, the index moved sideways in a tight range around this level for the rest of the week due to strong and persistent short-term profit-taking pressure.

Even though it failed to break over the psychological level of 1,400 points, the market benchmark showed more positive signals with a slow but firm rally in each session, along with large trading volumes.

However, many large-cap stocks, which have recorded outstanding gains compared to the general index recently, have not yet exited the correction trend after skyrocketing.

VCBS believes that the market will continue to witness division between stock groups, and opportunities are seen in both large-caps and penny stocks.

“Investors should diversify their portfolios more during this period, when there is still no industry or stock group leading the market," VCBS recommended.

According to VCBS, the sideways trend of the VN-Index is expected to continue this week, while cash flows will gradually shift to stocks with positive business results in the fourth quarter of 2021 and benefiting from easing and removing social distancing measures. It includes fertilisers, chemicals, electricity, oil and gas stocks and thereby opens doors for “surfing” for short-term investors.

Meanwhile, MB Securities JSC (MBS) said that the country's stock market ended the week with gains, but still has not surpassed the psychological resistance of 1,400 points. The liquidity last week was also more positive than the previous week, but the cash flow was active in small and medium stocks. Both groups have maintained their upward momentum and closed at historical highs.

Technically, the market's uptrend has not changed, and investors are paying more attention to specific stocks than looking at the index as business results are being released.

On the market, most sectors recorded growth in the past week. Of which, materials group rose the most, up 3.6 per cent in market capitalisation, supported by key stocks like HPG up 2.9 per cent, Hoa Sen Group (HSG) up 4.4 per cent, and Nam Kim Group (NKG) up 7.6 per cent.

It was followed by bank stocks with an increase of 2.2 per cent in market capitalisation. Stock with outstanding performance in the group were BIDV (BID), Asia Commercial Joint Stock Bank (ACB), MBBank (MBB) and Techcombank (TCB). — VNS

Market uptrend expected to continue this week have 674 words, post on bizhub.vn at October 18, 2021. This is cached page on Talk Vietnam. If you want remove this page, please contact us.