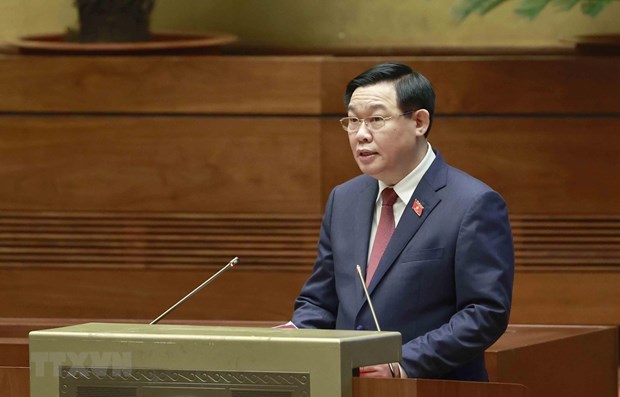 NA Chairman Vuong Dinh Hue delivered his opening remarks at the second session of the 15th legislature on October 20. (Photo: VNA)
Hanoi (VNA) – Lawmakers dealt with many important issues, including the implementation outcomes of the 2021 development plan and the draft plan for next year, on the first day of the 15th National Assembly (NA)'s second session, which opened on October 20.

Reporting on the implementation outcomes of the 2021 socio-economic development plan, Prime Minister Pham Minh Chinh said the Government has been exerting utmost efforts in the COVID-19 combat with the consistent goal of protecting people's health and lives. It has also been quickly completing a general strategy for the pandemic prevention and control and a programme on socio-economic recovery and development so as to keep the macro-economy stable, guarantee major balances, and promote production and business activities.

In the draft socio-economic development plant for 2022, the Government set up 16 main targets, including gross domestic product (GDP) growth of about 6 – 6.5 percent, consumer price index (CPI) expansion of around 4 percent, and the State budget overspending equivalent to some 4 percent of the nation’s GDP.

To realise those targets, the Government specified several major tasks and solutions, including taking flexible and effective moves to concurrently prevent and control the COVID-19 pandemic while recovering and developing the economy and society.

At the opening session, Chairman of the NA's Committee for Economic Affairs Vu Hong Thanh delivered a report verifying the implementation outcomes of this year's socio-economic development plan and the draft plan for 2022.

Chairwoman of the NA's Committee for Social Affairs Nguyen Thuy Anh gave another report verifying the performance in COVID-19 prevention and control and the implementation of Resolution No. 30/2021/QH15, issued at the first session of the 15th parliament in July.

After that, President of the Vietnam Fatherland Front Central Committee Do Van Chien reported on voters’ and people's opinions submitted to the second session.

Duong Thanh Binh, member of the NA Standing Committee and head of the Standing Committee's Ombudsman Board, reported on the outcomes of the monitoring of the settlement of voters' opinions sent to the 11th session of the 14th NA.

In the afternoon, Minister of Finance Ho Duc Phoc reported on the implementation of the State budget plan this year, the state budget estimate and the central budget allocation plan in 2022, along with the finance – state budget plan for 2022 – 2024. This issue was later verified in a report read by Chairman of the NA's Committee for Finance and Budget Nguyen Phu Cuong.

Prosecutor General of the Supreme People's Procuracy Le Minh Tri presented a proposal on the draft law amending and supplementing some articles of the Criminal Procedure Code. Chairwoman of the NA'

After a proposal on the draft law amending and supplementing some articles of the Statistics Law was presented by Minister of Planning and Investment Nguyen Chi Dung, a verification report was delivered by Chairman of the NA's Committee for Economic Affairs Vu Hong Thanh.

The two draft laws were later debated by legislators in groups./.

Legislators talk this year’s situation, development plan for 2022 have 660 words, post on en.vietnamplus.vn at October 20, 2021. This is cached page on Talk Vietnam. If you want remove this page, please contact us.