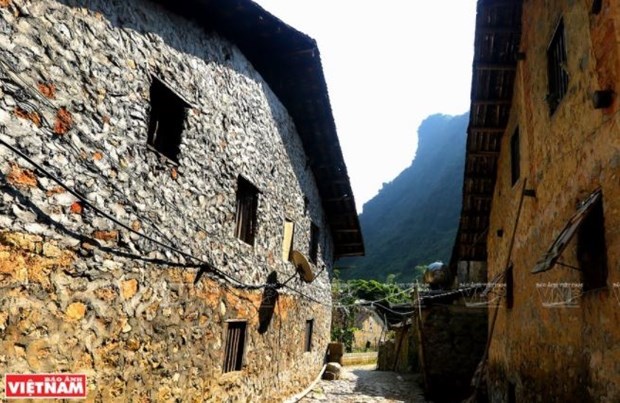 Visiting Cao Bang, in addition to famous destinations such as Ban Gioc Waterfall or Nguom Ngao cave, visitors cannot ignore an attractive destination located in this tourist complex, which is Khuoi Ky ancient stone village , a traditional village of the Tay people.

Khuoi Ky stone village is located near the provincial road No. 206, about 2km from Ban Gioc waterfall. From afar, visitors can see stilt houses which are made entirely of stone. Lying nestled up the mountains, 14 stone houses stand out among the vast and green mountain space. In front of the village is Khuoi Ky stream with clear blue water that adds more romance to the beauty of the village, where 100% of residents are Tay people.

The Tay people in Trung Khanh have a belief in stone worship. In their mind stone is sacred as a god that helps protect them from the harshness of nature. They consider rocks as the source of life and the center of the universe. They think people are born from stone and when they die, they turn to stone. 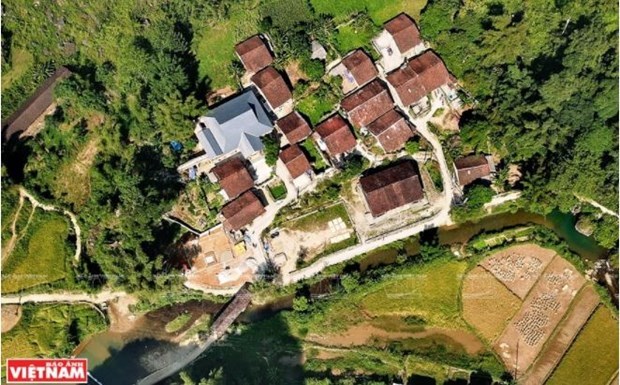 The village has 14 stone stilt houses covering an area of about 10,000m2, leaning against the rocky mountain in front of Khuoi Ky stream. (Source: Vietnam Pictorial)

According to the Management Board of the Non Nuoc Cao Bang UNESCO Global Geopark, the history related to these stone stilt houses dates back to the late 16th century. At that time, after moving to Cao Bang, the Mac dynasty immediately decided to build citadels to protect the country’s borders. Stone stilt houses were also built by that time.

Solid stone walls are formed by stones of various sizes stacked together, using an additional binder made from a mixture of limestone and sand. When completed, the wall thickness can be more than 30cm, clearly showing the indigenous, unique creativity of the Tay ethnic people.

The roofs of the stilt houses are covered with yin and yang tiles, which gives the houses on stilts in Khuoi Ky Cao Bang stone village a rare antique look.

The structure of each stone stilt house usually consists of 3 compartments with different functions, depending on the number of members of each family. 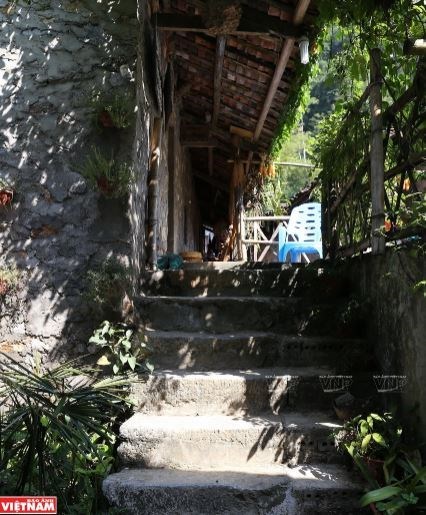 Khuoi Ky ancient stone village was recognized by the Ministry of Culture, Sports and Tourism as “Typical traditional cultural village of ethnic minorities” in 2008. This is a good condition for locals to promote tourism development in Khuoi Ky.

Quickly grasping the trend of promoting tourism development, the locality has formed a model of community tourism, with homestay accommodation services in Khuoi Ky village. In addition, Khuoi Ky villagers also volunteer to use community stone houses with a capacity of up to 100 people to serve tourists. 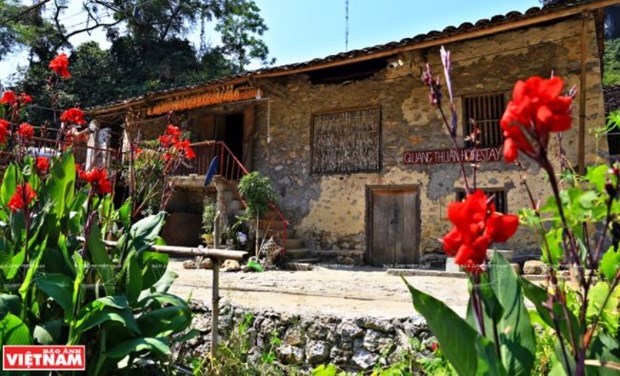 Stopping at Khuoi Ky, visitors will surely feel very interesting when they have chances to participate in many activities with local people. Living in the mountains and forests will make your soul relax and help you forget all your troubles./.

Khuoi Ky ancient stone village - attractive destination in Cao Bang have 728 words, post on en.vietnamplus.vn at October 28, 2021. This is cached page on Talk Vietnam. If you want remove this page, please contact us.