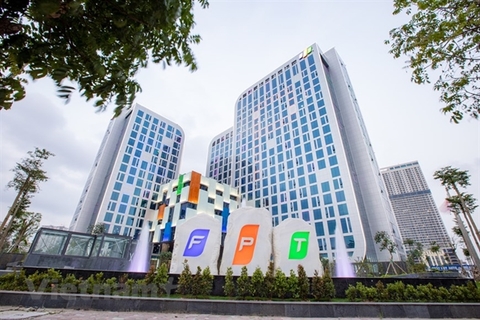 Information technology giant FPT has recorded VND24.95 trillion (over US$1 billion) in sales and VND4.57 trillion ($198 million) in pre-tax profits over the first nine months of 2021, up by 17.9 per cent and 20 per cent respectively.

Both revenue and profit enjoyed positive growth, with the technology and telecommunications sectors providing the primary impetus.

Overseas, sales increased in all of the major markets, especially in the US and Europe, due to high COVID-19 vaccination rates and steady economic recovery. FPT has consistently received substantial orders.

Revenue from digital transformation reached VND3.94 trillion over the nine months, up by 59.6 per cent, thanks to growth in key technologies such as cloud computing (Cloud), Artificial Intelligence (AI), and low-code.

FPT secured 16 projects totalling more than $5 million by the end of the third quarter this year.

After three quarters of 2021, the group has achieved 72 per cent of its revenue target and 74 per cent of its profit target for this year, indicating that it is on track to meet its full-year targets.

FPT's telecommunications sector has generated revenue of VND9.23 trillion, an increase of 11 per cent with a pre-tax profit of VND1.78 trillion, a 21.9 per cent increase over the same period last year.

Due to increased profits from PayTV, combined with the postponement of infrastructure investment due to the pandemic, the pre-tax profit margin of telecommunications services, including broadband and other services, continued to improve in the first nine months of 2021, reaching 20.8 per cent and 14 per cent, respectively. — VNS

IT giant FPT reports high profits over first nine months of 2021 have 415 words, post on bizhub.vn at October 22, 2021. This is cached page on Talk Vietnam. If you want remove this page, please contact us.