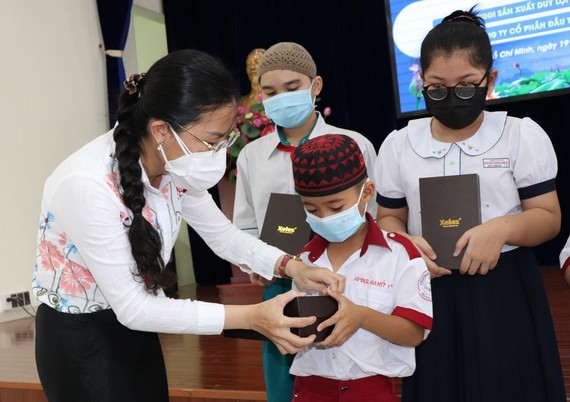 In this school year, students were abruptly forced to move all their education online in response to the Covid-19 crisis ; however, many families can't afford to buy learning equipment for their children, especially children of ethnic minority groups. Therefore, the program to give tablets aims to help ethnic minority children who have difficult circumstances and do not have learning equipment to have access to learning like their peers.
On this occasion, the program gave 90 tablets and gifts comprised of basic necessities and books to students of the Cham and Khmer ethnic groups in difficult circumstances in districts and Thu Duc city.
On the same day, the Labor Confederation in District 1 presented support packages to teachers of preschools, primary schools, and junior high schools in the district. This is an activity in the program “Giving away 200,000 support packages” of the Vietnam General Confederation of Labor to union members and workers affected by the Covid-19 epidemic.
Also, the Labor Confederation in District 1 gave 7,000 welfare bags including fish sauce, cooking oil, fresh vermicelli, rice each worth VND200,000 to poverty-stricken union members, teachers, and workers
According to the Ho Chi Minh City Labor Confederation, since the fourth Covid-19 epidemic occurred until now, trade unions in Ho Chi Minh City have given support packages to union members, employees, and workers affected by the epidemic.
Thereby, approximately 50,400 people received assistance under Decision 2606 of the Vietnam General Confederation of Labor with an amount of over VND 78.4 billion (US$ 3,442,550). Additionally, nearly VND5.9 billion was spent to support more than 27,240 others according to plan 3 of the HCMC Labor Confederation.
Last but not least, the city’s trade unions also spent nearly VND21.6 billion for meals of nearly 21,600 workers who had to stay at 180 businesses for production.

HCMC presents 90 tablets to ethnic minority students have 624 words, post on m.sggpnews.org.vn at October 19, 2021. This is cached page on Talk Vietnam. If you want remove this page, please contact us.