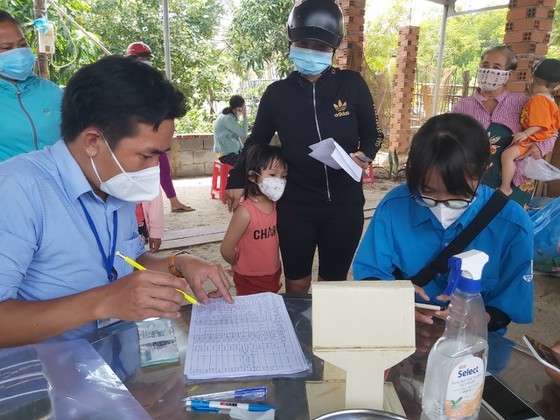 People in Can Gio District receive support of the Covid-19 relief package. (Photo: SGGP)
In District 12, Binh Tan, and Binh Chanh districts alone, where many workers with difficult circumstances and workers from other provinces gather, the support will be extended until November 7.

According to the plan, from November 1 to November 15, the People’s Committee of HCMC will organize three delegations to inspect and evaluate the implementation of the three support packages.

By 4 p.m. on the same day, 5.3 million underprivileged people have received the support of the third Covid-19 relief package.

Thus, after 22 days of implementing the third support package, the number of people who received support accounted for 78 percent of the total of more than 6.8 million people with difficult circumstances due to the impact of the Covid-19 pandemic. The list of these people has been validated and updated to the SafeID Delivery application.

However, as for members of poor and near-poor households and people entitled to monthly social protection allowances, who are facing difficulties, and those in concentrated isolation and receiving medical treatment, there is no time limit on the disbursement of the third support package. However, the city will try to give support to them as soon as possible.

Besides, for those who have been listed and validated, but while waiting for support, they are not in HCMC for some reasons, such as returning to their hometown, local authorities will compile the list of them and send it to the People' Committee of HCMC for consideration after October 31 or November 7.

HCMC extends disbursement of third support package have 464 words, post on www.sggpnews.org.vn at October 23, 2021. This is cached page on Talk Vietnam. If you want remove this page, please contact us.