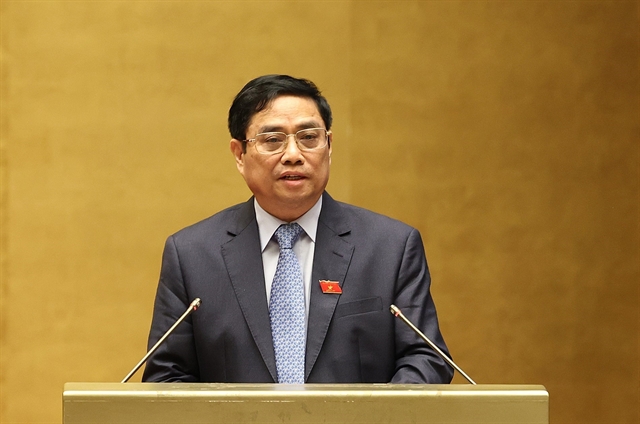 HÀ NỘI — Prime Minister Phạm Minh Chính has presented to the National Assembly a draft socio-economic development plan for 2022 which aims for a GDP growth of at about 6-6.5 per cent in 2022.

The PM delivered the plan at the second session of the 15th National Assembly which opened in Hà Nội on Wednesday.

The Government's socio-economic development plan for next year sets forth 16 key targets regarding the economy, social affairs and the environment, including keeping the consumer price index (CPI) growth at around 4 per cent and State budget overspending over GDP at 4 per cent.

To realise those goals, the Government has outlined major tasks and solutions, focusing on implementing the master strategy on pandemic prevention and control, with a roadmap on safe, flexible adaptation to and effective control of COVID-19.

According to the PM, 2022 is a significant year as it creates a foundation for the implementation of the 2021-2025 plan.

The PM also reported to the NA the implementation of the 2021 socio-economic development plan. He stressed that the Government has focused efforts on fighting the pandemic in the spirit of giving first and foremost priority to protecting the health and life of the people, while drawing up a roadmap on safe, flexible adaptation to and effective control of the pandemic to deal with its consequences and boost socio-economic recovery and development.

The Government has adjusted fiscal and monetary policies and others in a flexible fashion to maintain macro-economic stability, ensure major economic balances and spur production and businesses, Chính said.

He added that the Government has also worked to accelerate public investment disbursement, boost export and prioritise the implementation of mechanisms and policies supporting businesses and people.

The PM reported that the country is expected to fulfil eight out of 12 set targets for 2021. The macroeconomy continued to be kept stable, inflation was kept under control and the Consumer Price Index in the first nine months recorded an average growth of 1.82 per cent.

State budget collection in the nine-month period reached over 80 per cent; export turnover during the period reaped over US$240 billion; and national food security was secured.

The Government leader noted that the next steps would focus on promoting the construction and development of synchronic and modern infrastructure systems, particularly in transport, energy, digital infrastructure and agricultural infrastructure; improve education and training quality and scientific research and innovation; and enhance the connection between regions and between economic zones.

Gov’t sets growth target of at least 6 per cent in 2022 have 630 words, post on vietnamnews.vn at October 20, 2021. This is cached page on Talk Vietnam. If you want remove this page, please contact us.