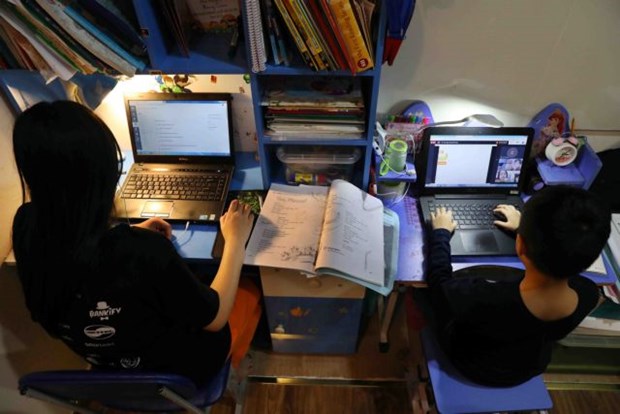 Students in Hanoi study online. Experts at an online conference held by the Vietnam Women's Academy branch in HCM City on October 16 said that students need to learn how to protect themselves online. (Photo: VNA)

HCM City (VNS/VNA) – Children need to learn how to protect their personal and social well-being in cyberspace, Phan Thi Cam Giang, a lecturer at the Vietnam Women's Academy’s branch in Ho Chi Minh City, said at a recent online conference.

Children are currently spending a great deal of time online, especially for academic study, due to the COVID-19 pandemic. They often feel restless when electronic devices such as their smartphone are not near them, according to Giang.

Her 2019 study of online game addiction among 300 students at one secondary school in HCM City showed that 80 percent accessed the internet for more than four hours each day. Besides online games, they were also attracted by YouTube and other websites.

Children need to be more aware of their usage and learn how to manage themselves and make decisions about their responsibilities, according to Giang.

Many parents lack the skills necessary to protect their children in cyberspace. Some parents have contacted psychologists to help children control their game or internet addiction.

As parents, many delegates in the conference said they needed guidance on the skills and tools that would help protect their children in cyberspace.

Children can face serious risks, including cyberbullying, sextortion and risks to privacy. These have become particularly acute amid the COVID-19 outbreak.

Dr Hoang Tuan Ngoc, a lecturer at HCM City University of Education, said that her survey about abuse among students showed that 30 percent of them had experienced abuse in an internet environment.

Nguyen Thi Nga, deputy head of the Department of Child Affairs under the Ministry of Labour, Invalids and Social Affairs, said the Government had issued legal regulations on protecting safety for children in cyberspace.

Prime Minister Pham Minh Chinh has approved a national programme on child protection online, which aims to protect the privacy of children and prevent and handle acts of abuse.

It focuses on supplying children with age-appropriate knowledge and skills so that children can protect themselves when online.

A network for rescue and protection of children in cyberspace has also been set up. The department operates the hotline 111 to receive information relating to children' problems.

According to a department report, more than 700,000 child sexual-abuse images and videos were found online in Vietnam last year.

A UNICEF survey of children and young people in Vietnam showed that one-fifth of the total number of surveyed children had been victims of cyber bullying.

Tran Thi Kim Thanh, head of the Children Affairs and Gender Equality Division under the HCM City Department of Labour, Invalids, and Social Affairs, said the division would work with the city Department of Education and Training to have programmes to strengthen communication about knowledge and skills on keeping safe in cyberspace for parents and children.

The division’s staff will receive training about this issue./.

Conference highlights ways to protect children in cyberspace have 801 words, post on en.vietnamplus.vn at October 18, 2021. This is cached page on Talk Vietnam. If you want remove this page, please contact us.