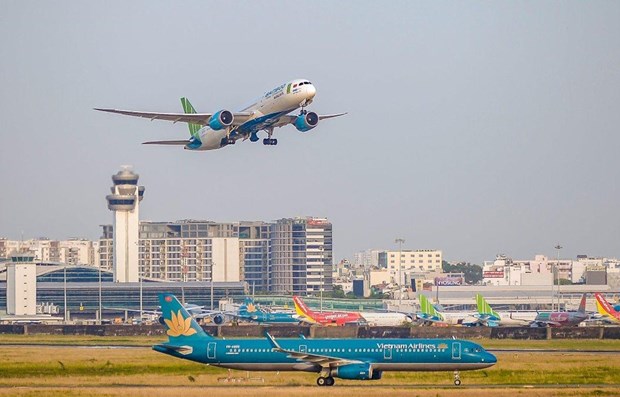 Hanoi (VNA) – The Civil Aviation Authority of Vietnam (CAAV) has proposed the Ministry of Transport permit airlines to resume domestic air routes as normal from December if the COVID-19 pandemic is controlled well nationwide.

The CAAV has submitted a draft plan on the operation of domestic flights between October 21 and November 30 after 10 days of the trial reopening of domestic air routes.

It suggested that the flight frequency on the routes of Hanoi – Da Nang, Hanoi – Ho Chi Minh City, and Da Nang – HCM City for each airline should not be over 10 percent higher than the average that carrier operated in the first week of April 2021, before the fourth wave of infections began.

Accordingly, there will be six flights per day for each route (two by Vietnam Airlines, two by Vietjet Air, one by Bamboo Airways, and one by Pacific Airlines). Each of other routes will have no more than one round-trip flight by one carrier per day, the CAAV proposed.

Within 15 days since the implementation of the plan, it will assess the pandemic situation in each locality and nationwide to work out an appropriate plan on flight frequency.

The authority also suggested the requirement for keeping distance on planes be removed, which has also been repeatedly urged by airlines recently.

Reviewing the pilot resumption of domestic flights over the past days, CAAV Deputy Director Vo Huy Cuong said only 49 percent of the planned flights have been operated, pointing out that airlines have had to wait for official instructions issued by the Ministry of Transport and the CAAV to sell tickets.

Demand for many air routes such as Thanh Hoa – Lam Dong, HCM City – Ca Mau, Da Nang – Can Tho, HCM City – Rach Gia and Da Nang – Buon Ma Thuot was low. While the routes linking Hanoi, Da Nang, and HCM City have only one flight per day now, failing to meet passenger demand.

Besides, except for Hanoi and HCM City, the percentage of people fully vaccinated against COVID-19 in many localities is still low. There are also many families who want to use air transport but their children under the age of 18 have yet to be inoculated, making them ineligible to board flights.

These factors have contributed to the low rate of flights operated recently, according to Cuong./.

CAAV proposes full resumption of domestic air routes from December have 519 words, post on en.vietnamplus.vn at October 18, 2021. This is cached page on Talk Vietnam. If you want remove this page, please contact us.