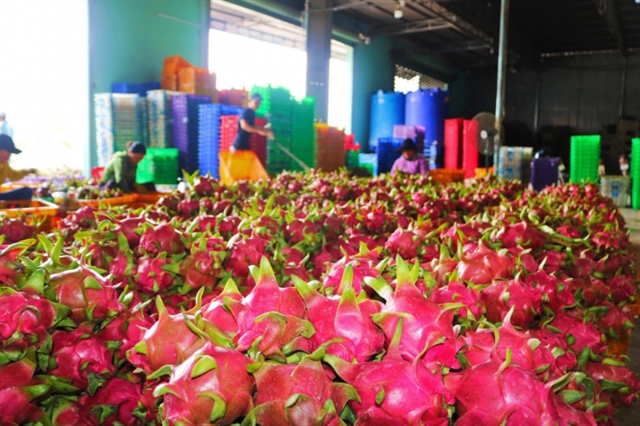 HÀ NỘI — The Ministry of Industry and Trade, the Ministry of Agriculture and Rural Development and Bình Thuận Province have implemented many solutions to promote the consumption of dragon fruit.

They have organised events on connecting local enterprises with partners at home and abroad to expand the consumption market for dragon fruit. They have also implemented solutions to speed up the clearance of goods at border gates, including priority in plant quarantine and transport for exported dragon fruit.

At the conference, dragon fruit production and trading enterprises and cooperatives in Bình Thuận connected with Indian partners, as well as businesses in Australia, Japan, China and Europe, opening up opportunities on expanding the export market for dragon fruit in the future.

Earlier this year, the Japanese Ministry of Agriculture, Forestry and Fisheries (MAFF) officially granted the Protected Geographical Indication certificate to Bình Thuận dragon fruit. This is the second agricultural product of Việt Nam to receive the certificate, after Lục Ngạn lychee.

This certificate has a great significance to affirm the prestige of Bình Thuận dragon fruit and create many new opportunities for exporting this product to key markets such as Europe, South Korea and New Zealand.

Bình Thuận Department of Industry and Trade in September issued a plan to develop production and expand the consumption market for Bình Thuận dragon fruit.

At present, Bình Thuận mainly consumes fresh dragon fruit, of which 80-85 per cent are for export and about 15-20 per cent for the domestic market.

Bình Thuận Province now encourages farmers to increase product quality in dragon fruit production but not expanding production areas for the sustainable development of this product.

The Bình Thuận Department of Agriculture and Rural Development has also requested the Sub-Department of Crop Production and Plant Protection and relevant agencies to strengthen the management and supervision of the use of planting region codes and codes of dragon fruit packing establishments that have been granted to organisations and individuals in the province.

It would also coordinate with the Market Management Department to strengthen inspection and control of the labelling at dragon fruit packaging facilities in accordance with existing regulations.

Bình Thuận has so far proposed the Plant Protection Department to grant codes to 78 dragon fruit growing regions and 268 of dragon fruit packaging facilities in the province.

This province has 33,750ha growing dragon fruit trees with a total output of 700,000 tonnes per year. China has been one of the key export markets of Bình Thuận dragon fruit. — VNS

Bình Thuận enhances dragon fruit exports have 661 words, post on vietnamnews.vn at October 18, 2021. This is cached page on Talk Vietnam. If you want remove this page, please contact us.