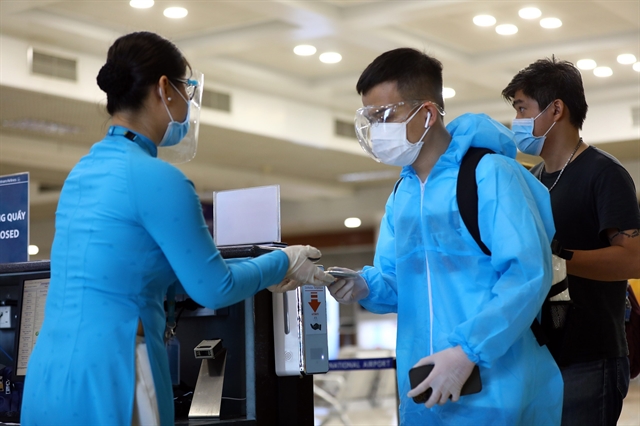 A passenger has documents checked before boarding a plane from Hà Nội to HCM City on October 10. —VNA/VNS Photo

HÀ NỘI — The Ministry of Transport announced on Tuesday that more domestic flights will be allowed to operate over the next month.

It comes after a successful pilot operation to gradually restore flight travel.

After November 14, it will increase to seven flights on those routes until the end of November.

On other routes, the maximum will be four flights each way per day.

The frequency of flights by each airline on each route will be increased by one per day on November 1 and 15 if the average seat occupancy of all airlines on the route during the previous 7 days reached at least 75 per cent.

During the pilot period from October 10-17, Vietnam Airlines, Vietjet Air, Bamboo Airways and Pacific Airlines operated 193 flights on 17 routes to and from 17 out of 22 airports.

Airlines to increase frequency of domestic flights have 324 words, post on vietnamnews.vn at October 20, 2021. This is cached page on Talk Vietnam. If you want remove this page, please contact us.