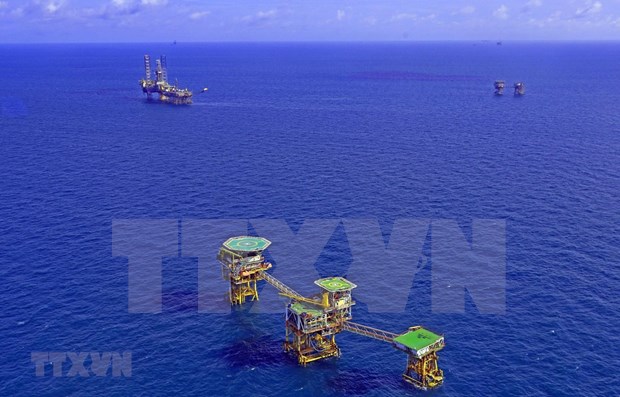 Hanoi (VNA) – The Vietnam-Russia oil and gas joint venture Vietsovpetro has maintained production cost for a barrel of crude oil at less than 30 USD, the lowest among Vietnamese oil and gas producers, according to the firm.

Though its production remains very low, there is still ample room for it to be cut further, said General Director Nguyen Quynh Lam.

Vietsovpetro produces crude oil so no matter how high or low global prices are, the company cannot put production on hold, he said, adding that the best way to deal with the uncertainty of global oil prices is to further reduce production cost.

It is the most prominent solution that has helped Vietsovpetro keep itself afloat against all odds over the last two years. According to Lam, the joint venture has improved its production efficiency in all stages, from the installment and operation of offshore drilling rigs, oil exploitation, to transport of oil to tankers and input supply to offshore rigs, so as to minimise costs.

Over the past two years, the company has cut up to 20 million USD in production cost just from optimising its supply of input to offshore rigs, the General Director noted. There is plenty of room left for Vietsovpetro to continue optimising its production and further cut the cost, he said.

Vietsovpetro is likely to complete all of its yearly targets in revenue, profit and State budget payment this month, three months ahead of schedule, thanks to its comprehensive and effective measures to promote production.

In order to maintain safe operations amid the fourth wave of COVID-19, the company's leaders have given drastic and flexible directions on the implementation of solutions to ensure the safety of workers and sustain production at the same time.

With proper risk assessment and forecast, the firm has undertaken multiple measures to cut cost and speed up digital transformation to maximise its performance in all conditions and circumstances.

Thanks to such efforts, it has saved 11.7 million USD in costs during the first eight months of 2021, equivalent to 124 percent of its yearly target.

During the period, Vietsovpetro exploited over 2.1 million tonnes of oil equivalent and condensate, exceeding its target for the period by 5.4 percent. Meanwhile, its natural gas output reached 55.8 million cu.m, surpassing the set goal by 8.4 percent. The volume of gas supplied to the shore also reached 605.3 million cu.m.

Its total revenue from oil and gas reached about 1.06 billion USD, 293.3 billion USD higher than its target and up 23.3 percent year on year.

Its budget payment hit 535.5 million USD, exceeding the plan by 154.5 million USD and representing a year-on-year rise of over 27 percent. Its profit hit 163.7 million USD, 52.9 million USD more than the figure set in the plan and increasing nearly 31 percent over the same period last year.

The company sets to exploit nearly three million tonnes of oil equivalent and condensate this year.

Earlier this month, it has won a bid to manufacture bases of the ZWP12 and ZWP15 rigs for the Zawtika 1D field development project invested by PTTEP Thailand.

The ZWP12 rig base weighs about 5,200 tonnes, and the ZWP15 rig base is about 6,300 tonnes. The construction and launch of the bases are expected to finish in 15 months, starting from this September./.

Vietsovpetro sees plenty of room to further cut cost for production optimization have 869 words, post on en.vietnamplus.vn at September 24, 2021. This is cached page on Talk Vietnam. If you want remove this page, please contact us.