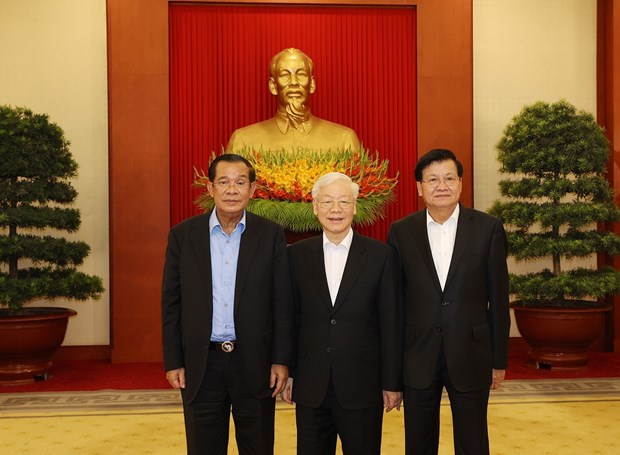 At the meeting, the leaders of the three parties highly valued the significance and importance of the meeting and informed one another of the situation of each party and country, including party works and socio-economic development, especially in the context of the fight against the COVID-19 .

They exchanged ideas on the cooperation over the past time; discussed its orientations for the time to come; and agreed on the importance of the traditional relations, solidarity and friendship among the three parties and countries. The leaders also agreed to strengthen cooperation in various fields and to continue exchanging ideas and cooperating in the fields in the time to come, for the benefit of the three peoples and for the sake of peace, stability, cooperation and development in the region and the world over.

On the occasion, the Cambodian leader paid courtesy visits to President Nguyen Xuan Phuc and Prime Minister Pham Minh Chinh, and the Lao leader did the same to President Phuc./.

Vietnamese, Cambodian, Lao top leaders discuss cooperation orientations have 407 words, post on en.vietnamplus.vn at September 26, 2021. This is cached page on Talk Vietnam. If you want remove this page, please contact us.