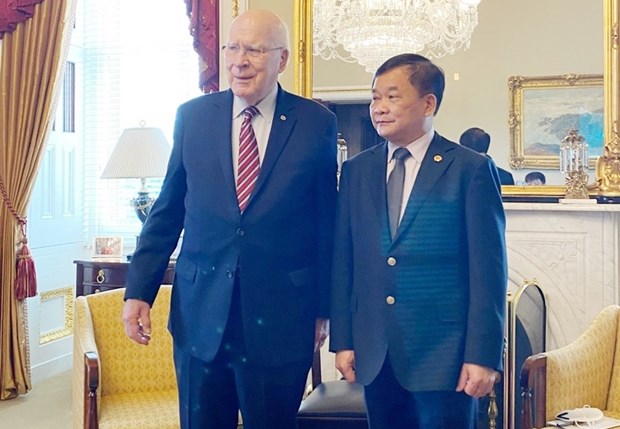 The US senator expressed his delight at outcomes of the nations' collaboration in tackling war consequences, particularly a dioxin detoxification project at the Bien Hoa airport and a project on improving the quality of life of people with disabilities in eight provinces heavily sprayed with Agent Orange.

He also acknowledged the progress made in cooperation in searching for remains of missing-in-action US servicemen and Vietnamese martyrs as well as in the implementation of joint communications campaigns.

Chien informed Leahy that his ministry has supported the COVID-19 vaccination of people involved in the Bien Hoa airport project to ensure its progress and asked the US official to support the provision of more funding to complete the project sooner.

Chien proposed the US study to expand the beneficiaries in the life quality improvement project as most provinces in Vietnam have AO/dioxin victims.

Leahy highlighted the importance of war-aftermath mitigation cooperation to the nations' comprehensive partnership and vowed to do his best to facilitate these above-said activities. 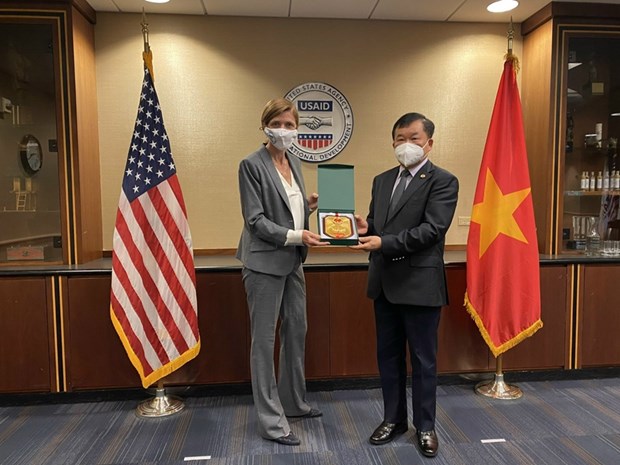 Earlier, Chien held a meeting with Samantha Power , Administrator of the US Agency for International Development ( USAID ), during which he proposed the agency study and support the identification of Vietnamese soldiers who died in the war, as well as improve testing capacity for Vietnam in this field.

Power said she backs Vietnam's proposals and stressed the need to accelerate the progress of the Bien Hoa airport project.

While in the US, the Vietnamese official also met with Ely Ratner, US Assistant Secretary of Defence for Indo-Pacific Security Affairs, and Atul Khare, UN Under-Secretary-General for Operational Support ./.

Vietnam, US step up cooperation in tackling war consequences have 373 words, post on en.vietnamplus.vn at September 24, 2021. This is cached page on Talk Vietnam. If you want remove this page, please contact us.