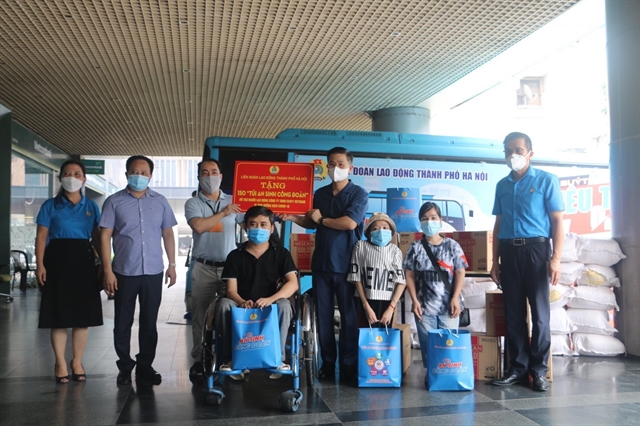 HÀ NỘI — The Vietnam General Confederation of Labour (VGCL) has proposed spending up to VNĐ89 trillion (US$3.91 billion) from the unemployment insurance fund to support labourers strongly affected by the COVID-19 pandemic.

Chairman of the VGCL Nguyễn Đình Khang said the confederation would propose the Ministry of Labour, Invalids and Social Affairs consider using the surplus unemployment insurance fund to ease financial difficulties for labourers during the fourth COVID-19 outbreak.

Those who have been participating in the unemployment insurance policy for at least six months would be eligible for financial support.

Figures from the VGCL showed that more than 1.16 million labourers have benefited from the Government's support package worth VNĐ26 trillion (US$1.13 billion) from July 8.

Meanwhile, more than two million labourers have lost their jobs or have taken unpaid leave since the outbreak of the COVID-19 pandemic in April.

Khang said the policies to give training courses for labourers were infeasible and not effective as expected as the majority of enterprises were struggling to maintain production activities and did not have time to develop training plans.

These policies were impractical when many localities were implementing strict social distancing regulations following the Government's Directive 16.

The principle of the Unemployment Insurance Fund as well as other short-term funds, according to the VGCL, was that employees who contributed to the fund would be entitled to get support when they lost their jobs, had their contract suspended or took unpaid leave.

On September 9, the Government assigned the Ministry of Labour, War Invalids and Social Affairs and relevant ministries to submit to the National Assembly Standing Committee and competent authorities the policies of using the Social Insurance Fund to support COVID-19 affected labourers and businesses. This task must be completed this month.

The Government also proposed the VGCL consider exempting union fees in the 2021-2022 period for labourers at enterprises affected by the pandemic.

The Government’s report showed that the spending of the Unemployment Insurance Fund in 2020 has increased by nearly 50 per cent over the same period last year with a total payment of VNĐ18.8 trillion ($827.8 million).

VGCL proposes to spend US$3.9 billion to support COVID-19 affected labourers have 544 words, post on vietnamnews.vn at September 16, 2021. This is cached page on Talk Vietnam. If you want remove this page, please contact us.