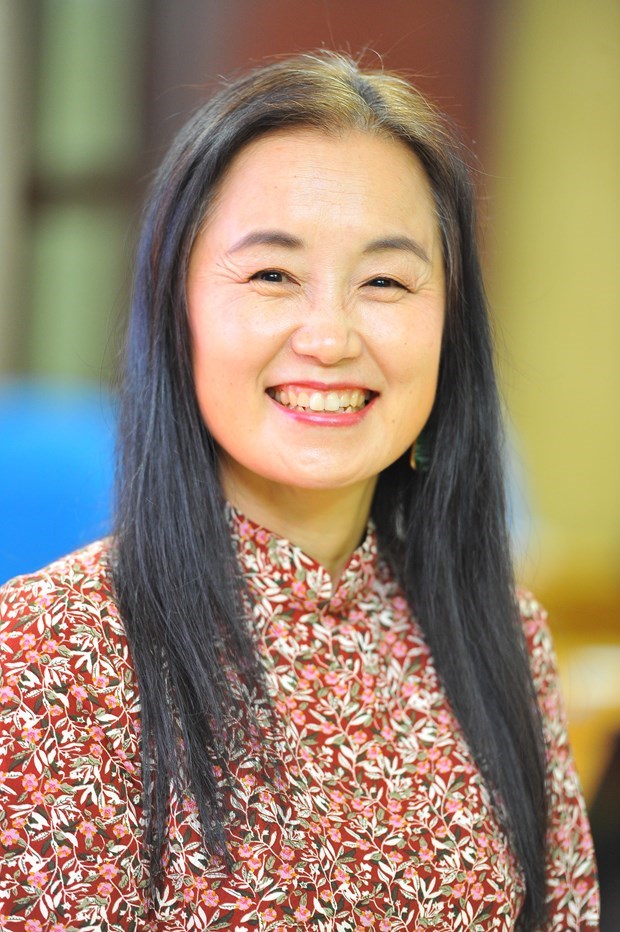 On the occasion of the 44th anniversary of Vietnam joining the United Nations (September 20), Kitahara granted an exclusive interviewed to the Vietnam News Agency on the cooperation between the UN organisation and Vietnamese partners over the past four decades as well as future development prospect.

Following is the text of the interview.

As the UNFPA Representative for Vietnam, will you share with us your evaluation of Vietnam, your partner, in cooperating and supporting UNFPA to achieve your mission in Vietnam?

I started my position as UNFPA Representative for Vietnam in September 2019, when the UNFPA Country Office was in the midst of implementing its 9th Country Programme of collaboration with the Vietnamese Government. But my experience with Vietnam can be traced back 20 years earlier, when I was covering the Vietnam desk at the UNFPA Headquarter in New York.

In that position, I had a chance to visit Vietnam to provide technical support for the Country Office, and now having returned to Vietnam, I have seen a lot of incredible changes in the country. Vietnam is now a middle-income country with very high development potential that can be tapped into, thanks to its very dynamic and hardworking people and the strong commitment of the Government to uplift the country onto the higher level of socio-economic progress.

The range of our partners is wide, including ministries, mass and civil society organisations, national media, the private sector, and other development partners in and outside the UN system.
We are very thankful to the excellent collaborations that we have enjoyed with all of our partners. And more recently, we have been successful not only to consolidate exiting partnerships but also to explore new partnerships, especially with private sector entities, to achieve common goals for vulnerable populations in Vietnam.

We are privileged to having such solid partnerships and collaboration, without which the delivery of our country programme would not have been as effective as we are seeing.

What are the highlights in the UNFPA projects/ programmes in Vietnam recently?

Having operated in Vietnam for more than 40 years, UNFPA is extremely proud to have been associated with Vietnam's spectacular achievements in sexual and reproductive health. Maternal mortality has been reduced by 72 percent over the years, and Vietnam was one of the very few countries in the world which have managed to ensure this result. We are continuing with this effort, and introducing telehealth as part of the country's digital transformation process, so as to ensure people's access to quality sexual and reproductive health care.

Last year, together with the Ministry of Labour, Invalids and Social Affairs (MoLISA) and General Statistics Office (GSO), and with support from Australia's Department of Foreign Affairs and Trade (DFAT), we launched the 2019 national survey on violence against women.

Vietnam is the only country in the world so far which managed to conduct such a survey with internationally recognised and credible methodologies for the second time. This allowed for a trend analysis. Through the survey, evidence was provided that still 2 in 3 women in Vietnam experience one or more forms of violence in their life time. In addition, more than 90 percent of them never seek any support services, which means that gender-based violence is hidden in Vietnamese society. And violence against women is costing Vietnam 1.81 percent of GDP, which is alarmingly high. The survey provided pointers for the country's policy and decision-making, and we are now shifting our gears towards interventions to eliminate violence against women . Together with KOICA, the one stop service centre was established last year in Quang Ninh province for the first time in Vietnam, providing a comprehensive set of services based on victim-centered approach, and our hotline is receiving more than 1,000 calls for help every month.

Lastly, UNFPA was a privileged partner to conduct the 2019 Population and Housing Census. Given a large population size, this was a challenging endeavor in Vietnam, but we helped with the introduction of advanced IT technology to speed up data collection and minimise human errors, and within six months following the Census date, a report was already launched, which is an amazing outcome in the international literature of the Census. And Vietnam's unique population characteristics emerged from the Census data.

First, Vietnam is experiencing rapid demographic change with nearly 70 percent of the population at working age (15-64), creating a special demographic window to accelerate significant socio-economic growth if appropriate investment is made.

As such, we supported the Government's effort to get the revised Youth Law approved, as part of promoting the participation of adolescents and youth in the country's development process and ensuring comprehensive sexuality education also using digital technology. At the same time, the country is facing the challenges of fast population ageing due to fertility decline, and we have supported MoLISA to strengthen social protection for older people, while promoting the development of the private sector for care and services for the elderly population.

Given the fact that Vietnam faced humanitarian challenges last year with floods and landslides, in addition to COVID-19, UNFPA provided emergency support to Vietnam in the areas of ensuring care for pregnant women as well as for women at risk of domestic violence. UNFPA is leading the coordination effort of national and international partners in the areas of gender-based violence in humanitarian settings. 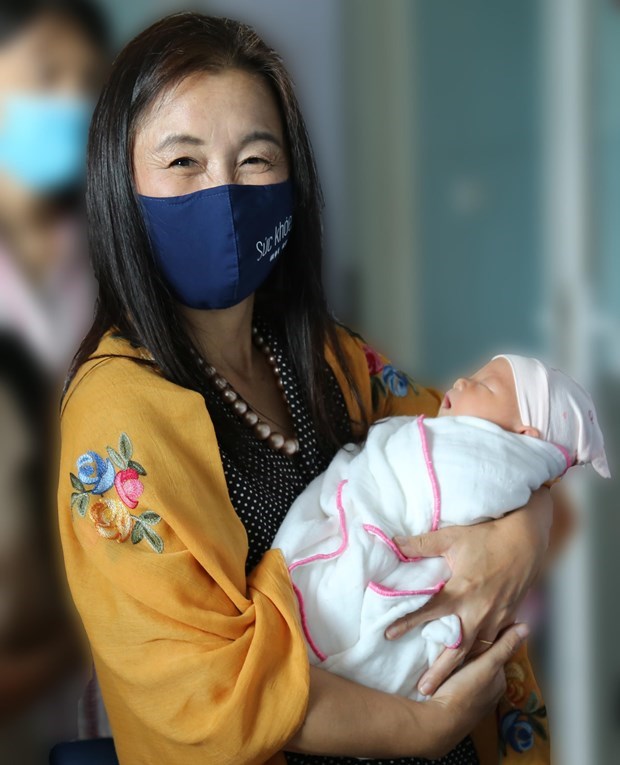 Naomi Kitahara, UNFPA Representative in Vietnam, holds a newborn baby during her working trip in northern Lai Chau province in May. (Photo courtesy of UNFPA Vietnam)

What will be your recommendations to Vietnam to further promote the efficiency of Vietnam-UNFPA cooperative relations in the coming years, especially in supporting Vietnam to achieve its 2030 sustainable development agenda?

Vietnam, together with countries around the world, is right on the Decade of Action for achieving the 2030 Agenda for Sustainable Development. Vietnam was quick in developing its National Plan of Action to implement the 2030 Agenda, showing unwavering commitments and is steadily moving forward.

As a middle income country, it is critical to look at inequality and disparity issues, which have also been accentuated by COVID-19. For instance, maternal mortality as a national average was reduced significantly as above, but maternal mortality in remote locations, especially among ethnic minorities, is still very high. Likewise, people with disability tend not to have full access to quality sexual and reproductive health care , and also they are often subjected to domestic violence.

Women in Vietnam including elderly women are particularly susceptible to violence, and inclusiveness is critical to ensure social assistance and social protection for the ageing populations. With COVID-19, domestic and international migrant workers are in particular hardships, and special consideration is required to support them, also through income-generation, professional counselling, life skills and comprehensive sexuality education.

As UNFPA, we provide advice to countries in the world in line with the principles of the International Conference on Population and Development. Our mandate as given by the UN member states is to support the country's effort to ensure that individuals and couples are able to decide freely and responsibly the number, spacing and timing of children.

In demographic analysis, it is clear that population aging occurs not just because mortality declined, and people live longer, but because fertility declined. Also, the sex ratio at birth in Vietnam is the third highest in Asia, following China and India, mostly a result of prenatal sex selection, as fertility limitation and decline exist in the country, coupled with a practice of son preference and the availability of reproductive technology. The ICPD principles are there to promote sexual and reproductive health and rights for all, regardless of age, ethnicity, or gender.

I am confident that the partnership between UNFPA and Vietnam over the four decades will continue to thrive. In any situations, UNFPA reaffirm our continuing commitment to "delivering Vietnam where every pregnancy is wanted, every childbirth is safe and every young person’s potential is fulfilled", and making sure that "no one is left behind"

UNFPA associated with Vietnam’s achievements in productive health have 1671 words, post on en.vietnamplus.vn at September 19, 2021. This is cached page on Talk Vietnam. If you want remove this page, please contact us.