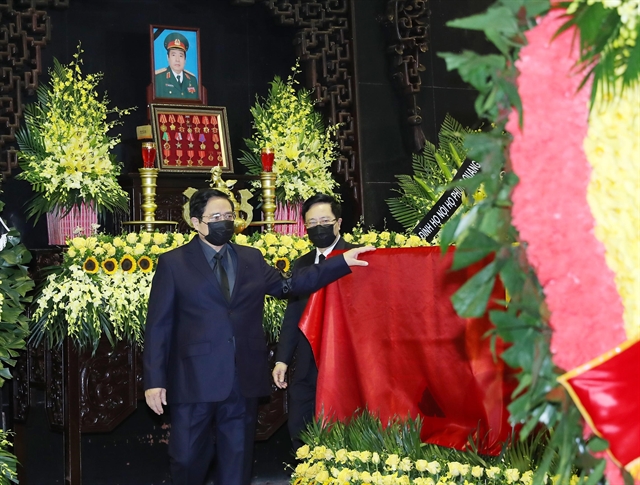 HÀ NỘI — The State funeral for General Phùng Quang Thanh, former member of the Politburo and former Minister of National Defence, was held at the National Funeral Hall in Hà Nội yesterday (Wednesday).

Delegations from the Party, State, National Assembly, Government, Việt Nam Fatherland Front, the armed forces, and crowds of officials from the capital city and many other cities and provinces nationwide gathered at the National Funeral Hall to pay tribute to the General.

Writing in the funeral guest book, President Nguyễn Xuân Phúc noted that General Phung Quang Thanh had dedicated his whole life to the revolutionary cause of the Party and the nation. He is an exemplary communist soldier and a brave, wise, decisive and mature commander in battle, he wrote.

The respect-paying ceremony and memorial service were held yesterday morning followed by the burial ceremony which took place in the afternoon in his hometown in Thạch Đà Commune, Mê Linh District of Hà Nội.

General Phùng Quang Thanh passed away after a period of illness at 3:45 am on September 11 at his private home in Hà Nội.

He was born on February 2, 1949 in Mê Linh District, Hà Nội (formerly in Vĩnh Phúc Province).

He joined the army at the age of 18 and was admitted to the Communist Party of Việt Nam, then known as the Việt Nam Workers’ Party, one year later in 1968.

Thanh fought in various battles of the war against America, notably during the counter-offensive of the Việt Nam People’s Army against Operation Lam Son 719 where he served as company commander in the 9th Battalion, 64th Regiment, 320th Division.

He commanded his platoon to accomplish the mission and was awarded the prestigious title Hero of the People’s Armed Forces on 20 September 1971.

In 1971 he studied in the School for Infantry Officers, later in the Academy of Infantry.

In 2001, Thanh became Chief of the General Staff of the Việt Nam People’s Army and Deputy Minister of Defence.

He then held the position of Minister of Defence. He was awarded the rank of General in 2007.

He was a member of the Politburo of the 10th and 11th Party Central Committee.

The General was honoured with the title ‘Hero of the People’s Armed Forces’ and many other noble titles. — VNS

State funeral held to commemorate General Phùng Quang Thanh have 909 words, post on vietnamnews.vn at September 15, 2021. This is cached page on Talk Vietnam. If you want remove this page, please contact us.