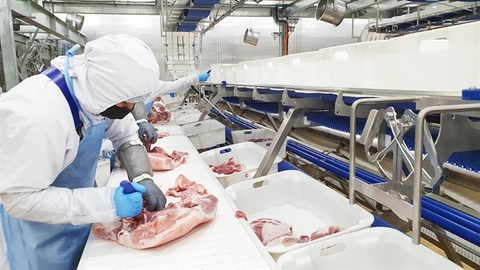 Robust selling pressure at the end of the session drove the VN-Index down more than 26 points, or 1.94 per cent, to close Monday at 1,324.99 points.

On the Ho Chi Minh Stock Exchange, the red covered most of the electronic board with 377 stocks falling, only 47 rising and 42 closing flat.

In the VN30 basket, which tracks the top 30 shares by market value and liquidity, 24 sank while only two advanced and four ended unchanged. Masan Group (MSN) was the stock dragging the market most with a loss of more than 5 per cent, followed by other heavyweights such as Vinhomes (VHM), Vingroup (VIC) and Vietcombank (VCB) which decreased by more than 1 per cent each.

Twenty-four sectors out of 25 tracked by vietstock.vn lost value, led by finance, insurance, securities with an average loss of around 5 per cent each; agriculture, mining, retail, rubber, plastic and chemical production were down between 3-4.2 per cent.

Only logistics and transportation bucked the trend, up 0.5 per cent thanks to the growth of budget carrier Vietjet (VJC) which rose more than 3 per cent.

Liquidity improved with more than 778 million shares worth VND21.8 trillion (US$948 million) traded, up 16 per cent in volume and 19 per cent in value compared to the previous session.

According to analysts at MB Securities Co, investors are still cautious in recent sessions which is shown in modest liquidity averaging around VND20 trillion per session for a second consecutive week.

"The market has been moving sideways for the past three weeks amid volatile world stock markets and speculative stocks showing signs of peaking," they wrote in a note, reckoning the VN-Index will continue moving around 1,327-1,360 points in the coming sessions.

On the Ha Noi Stock Exchange, the HNX-Index tumbled for a third consecutive session, losing 1.84 per cent to close at 353.01 points.

Liquidity also increased here with nearly 156 million shares worth VND3.1 trillion traded, up 8 per cent in both volume and value against Friday's levels.

According to many analysts, although the Government has always shown its determination to sustain macroeconomic stability this year, investors' psychology remains cautious at the current time, especially in the period of lacking supporting information.

FiinGroup's recent data showed the cash balance of investors at securities companies reached VND90 trillion ($3.9 billion) by the end of August and this amount is waiting for a huge opportunity to enter the market. — VNS

Shares sink in the red on cautious investor sentiment have 628 words, post on bizhub.vn at September 28, 2021. This is cached page on Talk Vietnam. If you want remove this page, please contact us.