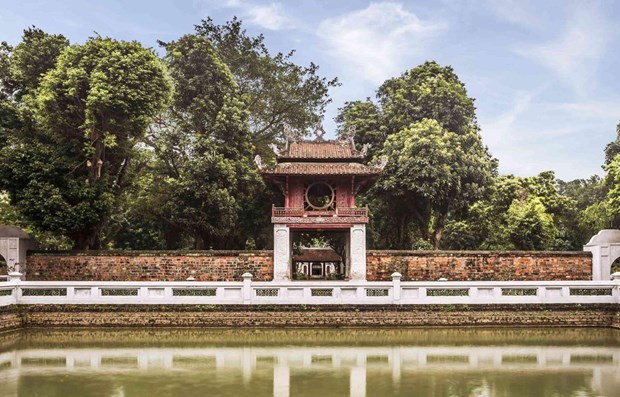 Hanoi (VNA) – An online discussion was held on September 26 to look into way to capitalise on values of the cultural space of Quoc Tu Giam in the Van Mieu – Quoc Tu Giam (Temple of Literature – Imperial Academy) complex in Hanoi.

A special national relic site, Van Mieu – Quoc Tu Giam was founded in the 11th century and considered the first university of Vietnam. It has also been a place for honouring the fondness for learning for centuries.

However, how to turn it into a vivid cultural space, not merely a tourist attraction, so as to disseminate the fine cultural values of not only this site but also Vietnam is not a simple issue.

Le Xuan Kieu, Director of the Van Mieu – Quoc Tu Giam Centre for Cultural and Scientific Activities, said the centre has applied new technology to studying and bringing into play the relic site's values and developing new products to serve visitors once the place is re-opened.

Notably, the centre is seeking new ways to bring traditional values closer to visitors to help them understand more and have appropriate behaviours toward the relic site, he added.

At the discussion, researchers and experts suggested many measures to transform the relic into a lively cultural space.

In early September, the Van Mieu – Quoc Tu Giam Centre for Cultural and Scientific Activities, the Gavisto Diplomat non-profit cultural and educational project, and relevant agencies debuted the Cultural Space of Quoc Tu Giam project which aims to develop this relic site into an open space for heritage-related ideas.

In less than a month, this project has recorded interactions of 1,500 people. Posts about history, culture, and the fondness for learning have also attracted great attention./.

Online discussion seeks to bring into play Quoc Tu Giam’s cultural values have 531 words, post on en.vietnamplus.vn at September 26, 2021. This is cached page on Talk Vietnam. If you want remove this page, please contact us.