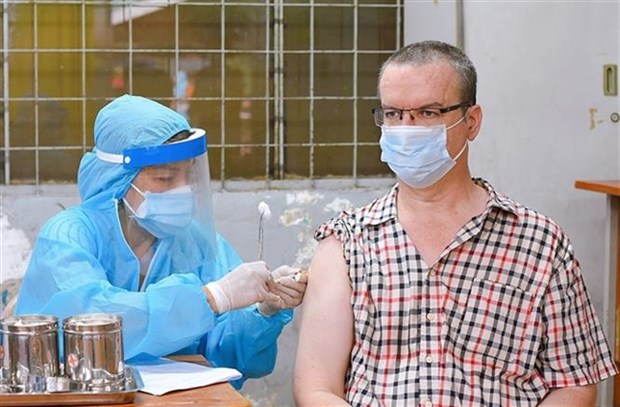 A foreigner gets vaccinated against COVID-19 in HCM City (Photo: VNA)

Hanoi (VNS/VNA) – Despite limited resources, the Vietnamese Government and local authorities are sparing no efforts to support and ensure safety for the expat community in Vietnam amid the COVID-19 outbreak.

As the vaccination drive is being accelerated across the country, the Vietnamese Government is determined to provide vaccinations for all foreigners living and working here, ensure them equal access to vaccines like local people.

With the motto of "leaving no one behind", on September 6, Prime Minister Pham Minh Chinh issued a document asking all localities and sectors to organise registrations and free vaccinations for foreigners in each locality regardless of nationality, form of residence and employment.

In Ho Chi Minh City , the country's current largest COVID-19 hotspot, the city’s authorities have mobilised all resources within its capacity to inoculate foreigners.

A representative of HCM City’s Department of Foreign Affairs told Vietnam News that the department had closely worked with the Department of Health in this cause.

On September 10, the Department of Foreign Affairs announced a registration portal on the internet for foreigners to sign up for vaccination, including for the first or second dose. All registration must be completed before September 15.

Earlier, some districts in the city carried out their own vaccination drive for foreigners.

District 7, which has the biggest community of expats in the city, has already inoculated 18,000 foreigners of 106 nationalities, which is more than half of the foreigners living in the locality.

Meanwhile in Hanoi, the Central Lung Hospital is assigned by the Ministry of Health to deploy vaccination for embassies, United Nations organisations and diplomatic missions, as well as foreigners in the capital city.

As Hanoi is setting a target of inoculating 100 percent of adult residents before September 15, many more foreigners, together with local people, are also receiving the jabs provided by authorities at district level.

Last week, Cau Giay district where about 4,000 foreigners are working and studying, started a large-scale vaccination campaign for foreigners.

Trinh Thi Dung, Vice Chairwoman of the district's People's Committee, said the committee had assigned relevant units to submit the list of foreigners who need to be vaccinated against COVID-19 in the locality. They would be given the jabs in the shortest time possible.

Besides vaccination, local authorities have also supported foreigners in need in other ways.

In early September, the Hanoi Union of Friendship Organisations coordinated with Hanoi's Vietnam Fatherland Front Committee to hand over hundreds of gift packages, including food, necessities, medical supplies and 500,000 VND (22 USD) in cash to 270 foreigners living in the city who face difficulties due to the pandemic.

Tran Thi Phuong, Vice President of the Hanoi Union of Friendship Organisations, said: "It is just a small gesture but we hope this has shown international friends the spirit of hospitality and care of the capital's authorities and people."

In the central city of Da Nang, eight hotlines in English, Japanese, Korean and Chinese were set up in late August to help foreigners solve difficulties amid strict COVID-19 restrictions.

Nguyen Thuy Anh, Deputy Director of the city's Department of Foreign Affairs, told Vietnam News: "From August 27 to September 9, the hotlines received about 560 calls, messages and emails from foreigners and overseas Vietnamese living in the city related to issues like support to buy food, essential goods and medicines, visa extensions, procedures to go to the airport or register for a vaccination, among others.

"The department has coordinated with the People's Committees of districts to buy and present free food to nearly 120 cases in difficult situations."

Thuy Anh added that in addition to this activity, the department regularly updated the guidelines and regulations of the central and local governments, mainly in English and Vietnamese to the expat community in the city by sending the information to various channels like foreign NGOs, foreign consular offices or posting information on the Connecting Da Nang Worldwide Facebook page.

"Depending on the nature of the issues, some documents and decisions of the city People's Committee are also translated to Japanese, Korean and Chinese," she said.

Although not having a hotline available to the general public like in Da Nang, HCM City's Department of Foreign Affairs has hotlines to directly work with foreign representative offices in the city to help settle foreigners' issues.

"For example, we have worked with them to help arrange transportation for foreigners to go to the airport or work with other localities to help stranded foreigners come back to the city to catch a flight home," the department’s representative said.

He said supporting disadvantaged foreigners was a policy set out by the city authority early on, which was carried out with the coordination of different agencies including the city's High Command, the city's police, the Department of Labour, Invalids and Social Affairs and the Department of Foreign Affairs.

In the past few months, as HCM City tightened its social distancing orders and required people to shelter in place, many foreigners struggled to get food due to the language barrier, shortage of delivery workers and financial difficulties.

"In the coming days, the city will open a centre run by the High Command to provide accommodation and food to homeless foreigners and other foreigners in need," he said./.

'No one is left behind': Vietnam provides support for foreigners amid pandemic have 1173 words, post on en.vietnamplus.vn at September 14, 2021. This is cached page on Talk Vietnam. If you want remove this page, please contact us.