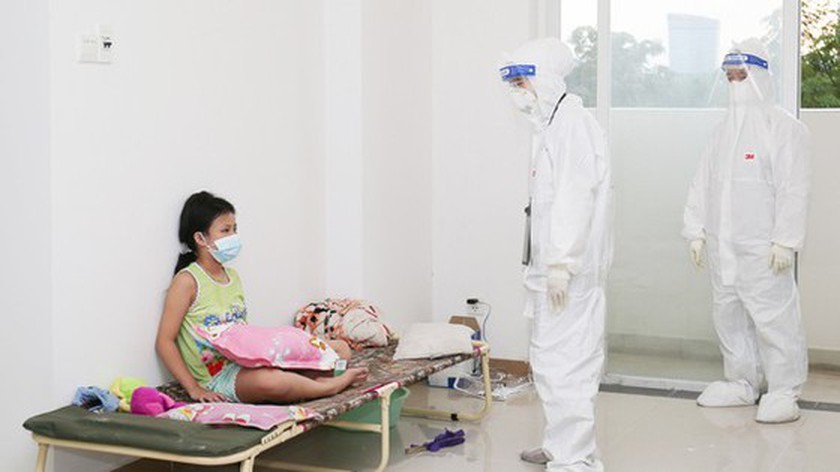 A child is being treated in a hospital

According to the government's decree 20/2021, a child under four years old whose both parents died of the coronavirus will be granted VND900,000 a month while those over four years old will receive VND 540,000 per month, said Le Minh Tan, director of the municipal Department of Labor, Invalids and Social Affairs, yesterday.

He added that the number of children whose parents died of Covid-19 has currently risen to 252 including 7 orphans both parents succumbed to Covid-19 and 245 orphans whose one parent died of the disease.

The Director said as per the Children Law and the government's decrees 56/2017 and 20/2021, orphans whose both parents died of Covid-19 will be raised by aunts, uncles, adoptive parents, or social charity shelters.

Mr. Tan revealed according to the Department of Education and Training of Ho Chi Minh City's proposal, the municipal People’s Committee has approved to exempt students from tuition fees for the first semester of the 2021-2022 school year. The exemtpion is applied for students in public and non-public high schools in the city except for foreign-invested educational institutions.

Currently, more than 3,000 children infected with Covid-19 are being treated in the southern metropolis, Mr. Tan said. Regarding support for children with Covid-19, the city authorities will provide meals for people undergoing treatment and concentrated isolation including children with VND80,000 a person daily, according to the city People’s Council's decree 09.

Meanwhile, according to the Government's Resolution No. 68 and the Prime Minister's Decision No. 23, the city People’s Committee issued Official Letter No. 2512 dated July 28 on the implementation of a number of policies to support employees and employers affected by the Covid-19 pandemic.

Covid-19 infected children from low-income families will receive rice, noodle and dairy products after being discharged from hospitals. Children from poor or near-poor households, orphans of both parents, children of one diseased parent living with their live parent who is unable to work, and children with disabilities are exempt from other charges.

Minister of Labor, Invalids and Social Affairs Dao Ngoc Dung has also just issued Decision No. 1013 on supporting children of pregnant women infected with Covid-19 born from April 27 and December 31. Each is eligible for an allowance of VND1 million.

At the same time, orphans of diseased parents and disadvantaged children of one Covid-19 infected parent between April 27 and December 31 will be given VND2 million each. The National Fund For Vietnamese Children will cover all these allowances.

HCMC gives monthly allowance to orphans whose parents die of Covid-19 have 1006 words, post on vietnamnet.vn at September 12, 2021. This is cached page on Talk Vietnam. If you want remove this page, please contact us.