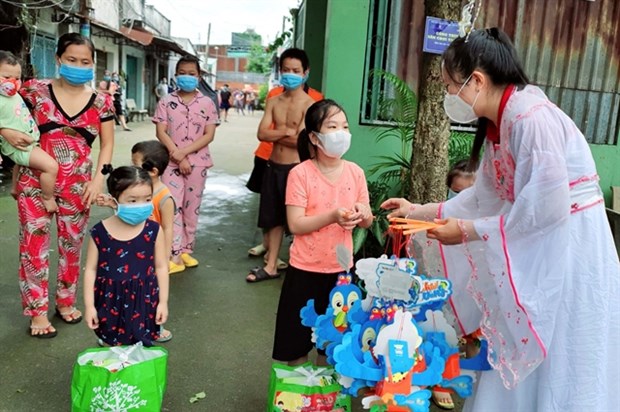 A representative of HCM City’s Youth Union wears the costume of a traditional character of the Mid-Autumn Festival, as she presents gifts for children of migrant workers in dormitories in HCM City (Photo: VNA)

HCM City (VNS/VNA) – Many children in Ho Chi Minh City , the country's coronavirus epicentre, have enjoyed a special Mid-Autumn Festival this year despite social distancing regulations thanks to joint efforts of authorities, organisations and volunteers.

In the past three days, the dormitories of migrant workers in Son Ky, Tay Thanh wards in Tan Phu district; Tan Nhut, An Phu Tay wards in Binh Chanh district; and Hiep Phuoc Industrial Zone in Nha Be district have been full of the sounds of happiness with children's laughter.

Youngsters celebrated their Mid-Autumn Festival with mooncakes, milk, small boxes of candy and biscuits, as well colourful paper lanterns. These are in gift packages for the full-moon festival local authorities, youth unions and benefactors, in the costumes of Hang Nga and Uncle Cuoi, the two traditional characters of the festival, presented to children in the city's pandemic-hit areas.

Nguyen Thi Tuyet Thu, a migrant worker in Son Ky ward in Tan Phu district said it had been a long time since she last heard the sound of children laughing.

"I thought everybody was busy putting the pandemic under control and would ignore the children's festival," she said.

Tuyet Mai, another migrant worker in An Phu ward in Thu Duc city, said the pro-longed social distancing has put her family and neighbours in serious financial difficulties.

"Having the gifts on this occasion is really meaningful and special for us. It has brought joy to the children and made us feel warm in these really hard days," she said.

The city's Department of Labour, Invalids and Social Affairs showed that the department, in cooperation with the city's Fatherland Front Committee and the Youth Union, has presented gift sets worth 300,000 VND (12 USD) each to disadvantaged children in seven social welfare centres and 40 dormitories in the city.

Tran Thi Kim Thanh, head of the department's Office for Child Protection, Care and Gender Equality, said this year’s Mid-Autumn Festival was very special due to the complicated developments of the COVID-19 pandemic and social distancing.

She said the department as well as local authorities, mobilised teams to visit and give moon cakes and lanterns to children in special circumstances, children of migrant workers who were seriously affected by the COVID-19 pandemic, and children in field hospitals and quarantine sites.

The department also called upon organisations and individuals to donate online learning equipment and textbooks to children to help them get back to school, she said.

Under the programme jointly held by the city's Youth Union, the city's Fatherland Front Committee, the Department of Labour, Invalids and Social Affairs, and the Ho Chi Minh City Women’s Union, a total of 5,000 gifts, 1,300 sets of textbooks, learning equipment, and 50 scholarships worth nearly 2.5 billion VND (109,120 USD) have been presented to disadvantaged children and those who are receiving treatment against COVID-19 in the city.

Van Thi Bach Tuyet, deputy head of the National Assembly delegation of HCM City said during her visit to the city's Children’s Hospital 2 and the Field Hospital No11 that this Mid-Autumn Festival, children would not celebrate as usual due to the social distancing regulations, but joint efforts of social organisations, charity groups and benefactors have contributed to caring for disadvantaged children, helping them to overcome this difficult period.

The Khan Quang Do newspaper collaborated with the Sharing group, and presented gifts to 1,000 children with cancer, HIV, and children infected with Agent Orange, as well as orphans in the city.

Dr Phuong Vu, from the Social Work Department of City Children’s Hospital, said many parents who were taking care of children at the hospital could not hide their tears of happiness when seeing the bright smiles after days of fighting with illness.

Y Ngan, a migrant worker at Tan Thuan Processing Zone, said she felt so touched seeing her five-year-old son have a fun time and have parties with moon cakes and fruits with volunteers at the Field Hospital in district 7.

Van Trung, who works as a builder, said he and his child just came to the field hospital for ten days with so many concerns and worries, but the child had a very happy time this Mid-Autumn Festival ./.

Efforts made to bring special Mid-Autumn Festival to kids amid COVID-19 have 1063 words, post on en.vietnamplus.vn at September 21, 2021. This is cached page on Talk Vietnam. If you want remove this page, please contact us.