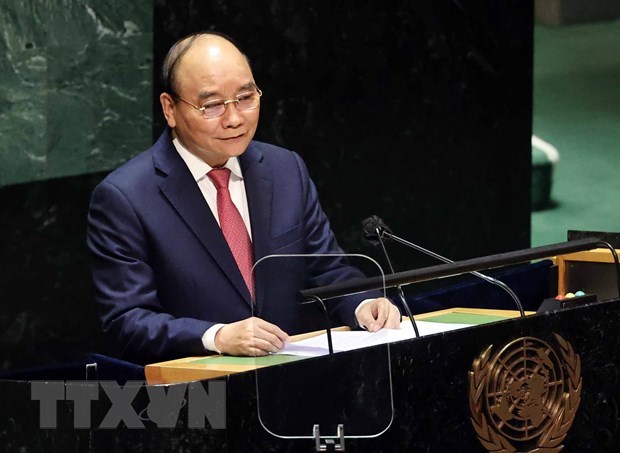 In its article, the halonoviny.cz newspaper spoke highly of President Phuc's speech at the high-level general debate at the UN General Assembly's 76th session.

It noted that the Vietnamese leader put forth detailed proposals to step up multilateral cooperation , including promoting the role of the UN and international law in responding to urgent global challenges, especially the COVID-19 pandemic, climate change, and issues relevant to peace and stability of each country, each region, and the world as a whole.

With regard to COVID-19 response, the article applauded Vietnam's proposal to enhance international cooperation, which should prioritise the supply of vaccines to the countries with low vaccination rates and create conditions for developing nations to cooperate in vaccine production and supply chains.

Facing the pandemic's intensive impacts, Vietnam called on countries to strengthen ties to turn challenges into opportunities by accelerating digital transformation, applying technology, and promoting sustainable development, according to the writing.

The newspaper also applauded Vietnam's appeal for stronger cooperation to minimise and deal with adverse impacts of climate change.

Vietnam asked developed nations to assist poor and developing countries in terms of finance, technology, and capacity building so as to reduce emissions, prevent and mitigate natural disasters, and adopt a circular economy.

This article highly valued the country's viewpoint that maintaining peace and stability in each country, each region, and the world is the prerequisite for post-pandemic recovery and growth, and that the international community, with the UN playing the central role, needs to show their goodwill, make responsible contributions, and exert common efforts to intensify trust among the countries on the basis of equality; cooperation; respect for one another's independence, sovereignty, and territorial integrity; no interference in one another's internal affairs; and peaceful settlement of disputes.

It also highlighted Vietnam's foreign policy that lays stress on multilateralism, with the UN playing the central role and international law serving as the foundation, to help maintain peace, stability, and development in the world.

It noted that addressing the UN General Assembly 's 76th session, President Phuc emphasised Vietnam's policy on fostering multilateral cooperation and international law, with the UN at the centre, to deal with global challenges, including navigation security in the East Sea, thereby helping to sustain peace, stability, and development in the Indo-Pacific region and the world.

This viewpoint matches the common trend in the current multipolar world, requiring the international community's cooperation and common efforts in response to global challenges, the newspaper wrote.

It stressed that the country showed strong determination to work with ASEAN to help maintain a world order based on international law and the UN Charter, and promote the international community's awareness and common efforts in dealing the East Sea issue by peaceful means on the basis of international law and the 1982 UN Convention on the Law of the Sea (UNCLOS), thus contributing to conflict prevention for the sake of regional and global peace, cooperation, and development.

Czech media spotlights Vietnam’s role in promoting multilateral cooperation, int’l law have 798 words, post on en.vietnamplus.vn at September 26, 2021. This is cached page on Talk Vietnam. If you want remove this page, please contact us.