The pandemic as a force majeure event has crippled people's ability to meet loan repayment requirements, but while the real estate sector also appears susceptible to the crisis, the State Bank of Vietnam and commercial lenders have taken measures to deal with worrisome property assets. 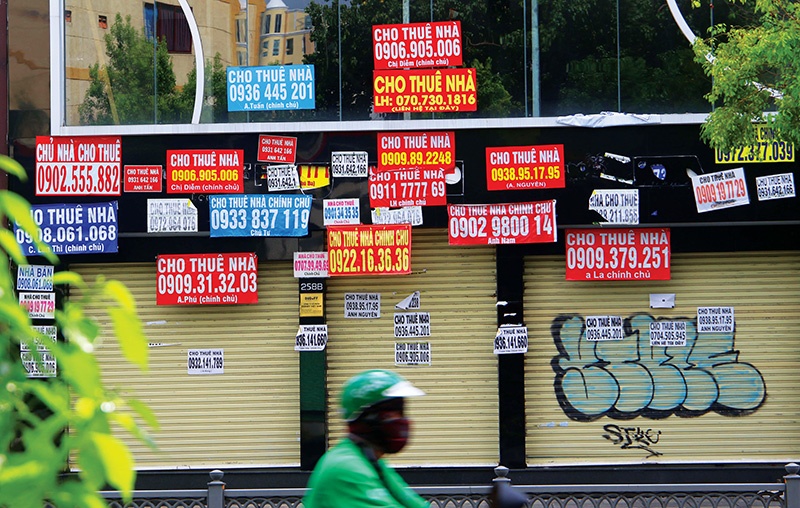 Individuals and companies are finding it very difficult to pay rent and other expenses because of closures, Photo: Le Toan

Prolonged social distancing and the sharp decline in incomes are burdening many people with active loans from banks. Nguyen Manh Ha, a marketing officer at a footwear company, said that in the past few months, he only earned 70 per cent of his previous income. Meanwhile, Ha's wife is a trader in Phuoc Binh market in Thu Duc city, which had been closed, leaving her without an income.

As a result, the couple currently cannot afford to pay their bank debt of $430 a month for an apartment in Thu Duc city. The total loan of $30,000 involves a fixed interest rate of 10.5 per cent in the first year, which will fluctuate to up to 11.5 per cent per year in the following years.

"The sharp decrease in our income forced me to reserve almost all of my salary to pay the loan, and so it is hard for me to cover other expenses," said Ha.

Ha's case is not unprecedented. Le Minh Xuan, an employee at a trading company in Ho Chi Minh City, said that she has worked from home since the social distancing began and only receives 70 per cent of her regular salary.

With a loan of $43,000 and a current interest rate of 10.5 per cent a year, Xuan and her husband do not know how to pay back their debts.

"If banks do not reduce their interest rates for homebuyers, many people like me will be unable to pay back their loans. This will set off a domino effect to the banking system, other homebuyers, and the real estate market in general," Xuan said.

Xuan suggested that if banks cannot lower interest rates right now, they could temporarily allocate loan parts to other borrowers until the disease is bated away. "In that case, my debt would only be about $260 per month, and I would be able to pay normal expenses for the family," she suggested.

Homebuyers are not the only ones who are wishing for a bank interest rate reduction. Many real estate investors are worried because they are also depending on loans from banks to buy assets with the aim to resell them for profits.

However, due to the current restrictions, property sales will remain low because buyers are maintaining a wait-and-see attitude while they still have to pay bank interests.

Economist Dinh The Hien said that while most businesses were negatively affected, banks still continuously announced high profits. "With these profits, banks should be able to share the difficulties of homebuyers," said Hien.

He recommended that banks should establish policies to extend loans and reduce interest rates to support borrowers. Moreover, Hien hopes that banks could have more suitable policies for homebuyers for their first house.

In addition to the interest rate policy, HoREA also suggested that the Ministry of Finance and the General Department of Taxation support land use taxation, and that the ministry considers proposing a delay of land use fees for commercial housing projects until the end of the year.

DKRA statistics revealed that many investors have to cut losses and sell assets due to heightening pressure from interest rates and unforeseeable circumstances, with their incomes particularly hurt.

Last week, the SBV issued a new circular amending and supplementing a number of articles of Circular No.01/2020/TT-NHNN directing foreign credit institutions and bank branches to reschedule debt payments, waive and reduce borrowing interests and fees, and maintain the support for customers affected by the pandemic. The fresh move is envisaged to enable banks to assist vulnerable customers.

However, Nguyen Thi Hong, Governor of the SBV, noted that the central bank would continue to strengthen inspection, supervision, and direction of credit institutions on risky areas, particularly property and securities.

This is not the first time the SBV publicly has cautioned various risks in real estate. In April, the SBV issued Official Dispatch No.3029/NHNN-TTGSNH to credit institutions and foreign bank branches, instructing them to implement strict control measures over the quality of credit in sectors with potential risks such as real estate and securities.

The prime minister has directed relevant ministries to closely coordinate with localities to strengthen supervision on land speculation or unreasonable land pricing.

"Loan-based real estate is making up a sizeable proportion in banks' balance sheets. Thus, the SBV and ministries are keeping an eye on property speculation to prevent a housing bubble like in the 2007-2012 period, which could lead to a banking crisis," emphasised Governor Hong at the SBV's conference last week. "In these challenging times, fragile industries, such as manufacturing, agriculture, tourism, and transportation, are the centre of banks' critical support."

The real estate sector is now off the support list for interest rate reductions, with the current interest rates of the sector set at up to 11.5 per cent per year. High lending interest rates and good credit growth explain the enormous profits of the banking industry in the first six months of the year.

Meanwhile, a handful of lenders are rolling out preferential interest rates applicable for all sectors, including property. Vietcombank, VIB, MB, and BIDV, among others, have offered specific incentives for homebuyers or for home repairs.

Hoang Linh, financial director at VIB, said that the bank has optimised the costs of capital mobility by boosting cash growth and increasing current account savings.

Buyers seek loan help have 1211 words, post on dtinews.vn at September 19, 2021. This is cached page on Talk Vietnam. If you want remove this page, please contact us.