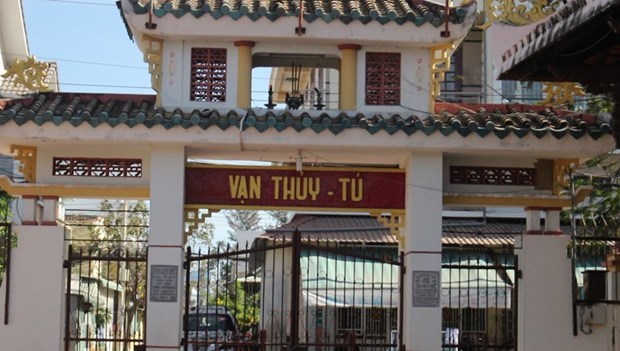 Van Thuy Tu is one of the oldest fishing villages in south central Vietnam.  (Photo: VNA)

The project is part of efforts of local authorities to turn the festival into an attractive tourist product of the locality.

Under the project, from 2022 the "Cau Ngu" festival will take place in the sixth lunar month at Van Thuy Tu temple , and along roads around Phan Thiet fishing port, Hon Lao area, and on Ca Ty river. The People's Committee of Phan Thiet city will be the host of the event.

The temple was built by Thuy Tu villagers in 1762 to worship the Whale God. The temple’s architecture follows the traditional style used in the fishing villages of central and south central Vietnam, looking to the East. Its roof is covered by yin-yang tiles, depicting the images of dragons and unicorns.

The conservation and promotion of unique folklore values of the festival not only meets the need of belief and spiritual activities but also aims to turning the festival into an attractive tourism product to domestic and foreign visitors.

The project is expected to contribute to raising awareness and responsibility of authorities at all levels and people in preserving and promoting cultural heritage values.

Communication campaigns will be enhanced to widely promote the value and characteristics of the belief of whale worship and the "Cau Ngu" festival.

The locality will also coordinate with travel agencies to include the festival into tours, thus attracting more holidaymakers to Binh Thuan.

The main hall of Van Thuy Tu Temple includes an altar dedicated to the whale gods and fishermen's ancestors. 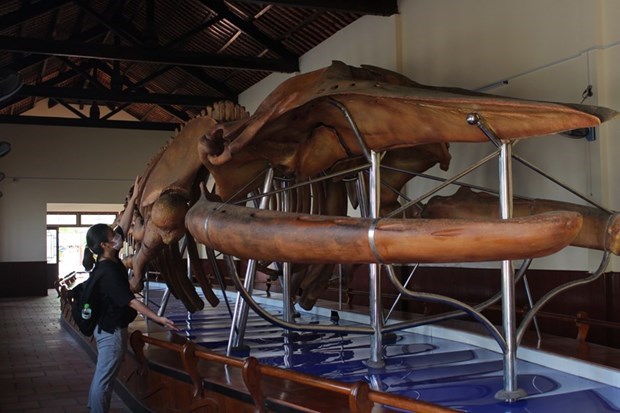 Vietnam's largest whale skeleton, 22 metres in length and weighing 64 tonnes, is being preserved at Van Thuy Tu temple. This whale skeleton was restored in entirety by the Nha Trang Ocenography Institute in 2003 and is considered the largest intact whale skeleton in Southeast Asia.

Next is the chamber for worshipping the sea gods, such as the Thuy Long Thanh Phi Goddess, the Hi Hoang Thai Hieu Tien Su God, and the Dragon God.

Behind the worshipping chamber is a large space containing more than 100 sets of whale skeletons, many dating back more than two centuries ago.

The temple is located near a large land mass, which is a burial ground for the whales and is called the Jade Kylin Holy Land.This is also the place where the locals hold ceremonies, such as the spring festival and rituals for rice crops.

But the most important festival for all fishermen in Phan Thiet is the "Cau Ngu" festival, during which they wish for prosperity, good weather and bumper harvests.

According to local legends, after the temple was built, a storm accompanied by heavy rains had lashed the area.

During three stormy days, a number of fishing boats were stranded off the coast, and they were helped by "Ca Ong" (Mr Whale). But "Ca Ong" died because of exhaustion after helping push the fishing boats to shore safely.
That is why Vietnamese inhabitants in the coastal fishing villages from the North to the South respect whales.

Fishermen in Phan Thiet are always very excited when they introduce their beliefs about worshiping their whales. They believe that "Ca Ong" is the God of Nam Hai – the one who helps the coastal people lead a peaceful and prosperous life. Therefore, they have very thoughtful and solemn forms of burial.

When the giant "Ca Ong" dies, it is buried in the sea to avoid causing pollution inland. But no matter where they are buried, fishermen very solemnly burn incense, make offerings to their fish, and then cover them with red cloth to show respect.

After many years, when the fish's body is only bones, people continue to put the bones in the tomb to worship together.

The festival is observed under the belief that whales rescue people in danger at sea, whilst they also represent a symbol of good fortune that can bring local people a prosperous fishing season.

With its typical values, the "Cau Ngu" festival at Van Thuy Tu temple was recognised as national intangible cultural heritage by the Ministry of Culture and Sports and Tourism in 2019./.

Binh Thuan: Efforts made to preserve unique values of “Cau Ngu” festival have 884 words, post on en.vietnamplus.vn at September 14, 2021. This is cached page on Talk Vietnam. If you want remove this page, please contact us.