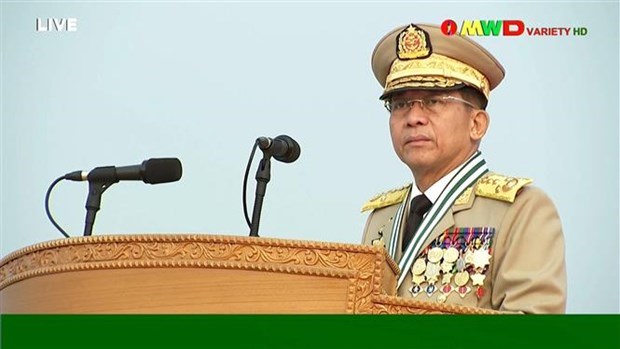 Hanoi (VNA) – Chairman of the State Administration Council of Myanmar Senior General Min Aung Hlaing has promised the organisation of new elections , while saying the government of Myanmar is ready to work with any s pecial envoy appointed the Association of Southeast Asian Nations (ASEAN).

Myanmar is ready to work on ASEAN cooperation within the ASEAN framework including the dialogue with the ASEAN Special Envoy in Myanmar, Min Aung Hlaing spoke in a televised address on August 1.

The 54th ASEAN Ministerial Meeting (AMM 54) is scheduled to open on August 2, during which foreign ministers will discuss the implementation of the five-point consensus to settle crisis in Myanmar.

ASEAN has been leading the diplomatic effort on Myanmar since the Southeast Asian country fell into a political stalemate on February 1 after the military arrested government leaders, regional and state governors and senior members of the National League for Democracy (NLD) party./.

Myanmar pledges to cooperate with ASEAN’s special envoy have 370 words, post on en.vietnamplus.vn at August 1, 2021. This is cached page on Talk Vietnam. If you want remove this page, please contact us.