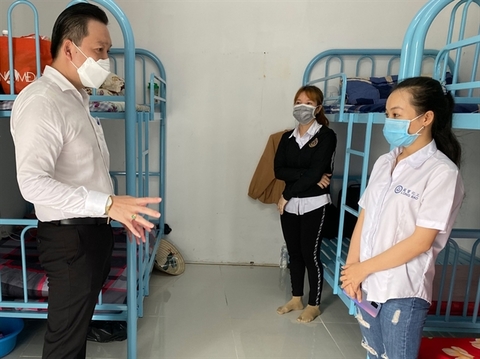 A representative from Binh Duong Department of Industry and Trade checks the 3 on-site model of an enterprise in the province. — Photo baobinhduong.vn

Wood processing enterprises which have been implementing the “3 on-site” model in the provinces of Binh Dinh, Binh Duong and Dong Nai have urged the public to put less pressure on them after a cluster of COVID-19 cases were detected at wood production facilities in these provinces.

The latest survey from the Binh Duong Furniture Association (BIFA) showed that among 100 wood enterprises which have been operating the “3 on-site” model, 71 have ensured operations while 29 – including Long Viet, Hoa Net, Tan Nhat, Minh Duong, SKS Furniture and Vietnam Housewares – have closed due to F0 cases detected.

Similarly, 60 per cent of 50 surveyed wood companies in Dong Nai Province said they have suspended operations because their workers are isolated; 30 per cent of them have been operating moderately to fulfil orders they have inked.

The “3 on-site” model, which involves on-site production, dining and rest has received an enthusiastic response from workers as it has helped maintain production and business, improve income while ensuring COVID-19 control and prevention.

Nguyen Thanh Ha, Deputy Director of Binh Duong Department of Industry and Trade, told an online meeting on Wednesday that many wood processing firms which have been performing the “3 on-site” model, expressed concerns after F0 cases were detected at many enterprises, notably a cluster of 248 COVID-19 infections found at Long Viet Company.

"But what they are worried about is not how to maintain production but the pressure of public opinion," Ha said.

Earlier, there was a rumour that Long Viet Company did not report COVID-19 cases to the authorities. Bui Nhu Viet, the company's general director, said before starting the “3 on-site” model, all employees were tested for the first time and the results were negative.

When a suspected case was detected through a later rapid test, the company immediately contacted the Binh Duong Province Centre for Disease Control for support. Staff from Binh Duong CDC came to the company the next day, asking it to hire a medical unit to undertake PCR tests for all employees, then report the results to the centre.

Viet said it took one to three days for his firm to get the PCR results. After that, his company immediately submitted the report on results to the Binh Duong CDC and the F0 cases were sent to the Tan Binh field hospital for treatment.

Sharing with the difficulties of Long Viet Co, Nguyen Phu Vinh, Director of Binh Duong Province-based Kim Vinh Phu Company said even though employees of enterprises applying “3 on-site” model had negative test results, it was inevitable that infected cases might be detected later.

“If there is an F0 case in the factory, the authorities and the public should reduce the legal burden for businesses, and guide these firms to draw up suitable measures, because businesses sometimes are confused about what they need to do next,” Vinh said.

Vinh also petitioned the Government to support enterprises in COVID-19 testing which cost firms a lot of money.

For example, his company has built 55 bathrooms for about 300 workers. On average, six people use a room and no one can use any others. It has also set up a three-layer fence to protect the factory, the dining area and the workers’ rest area so that no one can go in or go out.

Frequent COVID-19 tests have been also carried out, Tan said, adding that some employees have been tested up to five times.

Though admitting “3 on-site” is quite a costly operational model, Tan said the factory's closure would impact production and supply chains and mean workers will lose their jobs.

Pham Ngoc Phuoc, Director of An Khang Furniture Company in Binh Duong Province, agreed. He said his firm foresees difficulties face when deploying “3 on-site" model. Among them are the employees' fear of transmission of COVID-19 and frequent tests.

Preparing meals and rest areas for workers in a short time is also problematic as the factory is a place for production. It will be difficult to ensure sufficient raw materials due to affected supply chains, Phuoc said.

Phuoc added his firm is currently in the 10th day of applying the “3 on-site” model, fortunately it still works well and employees of his company are tested once a week.

“We deploy “3 on-site” not for the benefit of the business, because this will lead to higher production costs, but for workers who will still have income amid the pandemic,” he said. — VNS

Wood enterprises implementing '3 on-site' ask for less public pressure have 956 words, post on bizhub.vn at July 30, 2021. This is cached page on Talk Vietnam. If you want remove this page, please contact us.