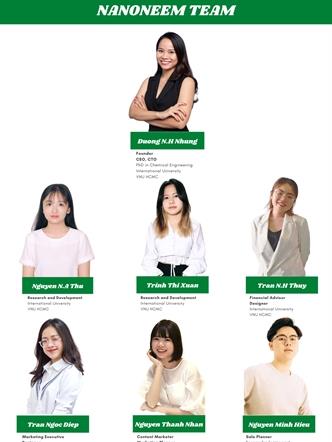 The Nanoteem team was among the top five to receive the award "Impactful Social Innovative Concepts" in the Social Business Creation 2021 competition. — Photo courtesy of International University

Three Vietnamese projects were among the top five to win the "Impactful Social Innovative Concepts" awards in the Social Business Creation 2021 competition.

Among Viet Nam's three projects, International University in HCM City had two projects, including one on herb-based pesticides for green agriculture and the other on a website platform using artificial intelligence (AI) to detect Alzheimer's disease.

The project Nanoneem, which protects neem forests while assisting local people, was led by Dr. Duong Nguyen Hong Nhung, lecturer from the International University’s School of Biotechnology, along with the school’s students and others from the Foreign Trade University in Ha Noi.

Brain Analytics is a website platform using artificial intelligence (AI) to detect Alzheimer's disease. The project is run by a group of students from the International University's School of Biomedicine under the guidance of Dr. Ha Thi Thanh Huong, head of the department of regenerative medicine at the school.

The third award went to Cereal Straws of Vinastraw, a manufacturer of biodegradable drinking straws, whose representative is Do Thi Huong Thao, along with 10 students from universities in Ha Noi. The project makes eco-friendly products from common materials found in the country.

Among the top five projects, the other two were from Mexico and Argentina. — VNS

Vietnamese projects win three “Impactful Social Innovative Concepts” awards have 532 words, post on bizhub.vn at July 29, 2021. This is cached page on Talk Vietnam. If you want remove this page, please contact us.