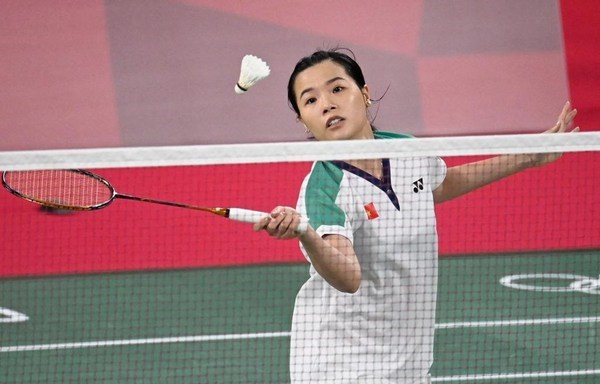 Linh, who is joining the Olympics for the first time, showed stable performance without any anxiety.

The Vietnam Badminton Federation decided to reward Linh with 20 million VND in cash right after her successful game.

Particularly, veteran gunman Hoang Xuan Vinh will open the Olympics with the 10-m air pistol event that helped him win a gold medal at the Rio 2016 Olympics.

Earlier on July 23, Vietnam's quest for Olympic glory began before the opening ceremony with archers Do Thi Anh Nguyet and Nguyen Hoang Phi Vu in action.

Nguyet finished 49th among a total of 64 competitors with 628 points in the qualifying round of the Women's Recurve event.

Nguyet, however, will progress to the next round to compete against the host nation's Hayakawa Ren.

This year marks the first time that the 20-year-old archer has competed in the Olympics.

On the men's side, Nguyen Hoang Phi Vu gained 647 points and ranked 53rd out of 64 athletes. Kim Je Deok of the Republic of Korea led this category with 688 points, followed by Ellison Brady of the US with 682 points and Oh Jinhyek with 681 points.

With this result, Vu will face Tang Chih Chung of Chinese Taipei who ranked 12th in the qualifying round with 668 points.

With a total score of 647 for Vu and 628 points for Nguyet, the two Vietnamese archers have a total score of 1,275, and are ranked 23 out of 29 in the mixed doubles. This means they can't win the right to compete in the next round, taking place on July 24.

Vietnamese female badminton player wins first game at Tokyo 2020 Olympics have 602 words, post on en.vietnamplus.vn at July 24, 2021. This is cached page on Talk Vietnam. If you want remove this page, please contact us.