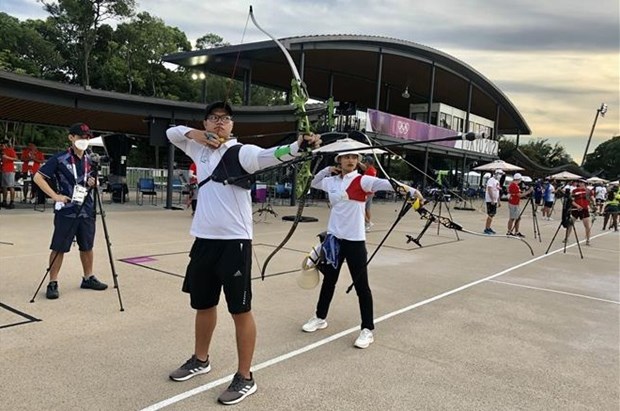 Archer Do Thi Anh Nguyet was the first Vietnamese athlete to compete at the Games from 9am (local time).

This is also the first time that Vietnamese archers have qualified for the global sporting event.

The 20-year-old archer is competing against 63 rivals in the women's recurve bow category, which is her forte.

On the same day, Nguyen Hoang Phi Vu, another archer of Vietnam, will also start his journey in the men's recurve category. He will also confront 63 rivals in the event.

If the total points of the two archers are among the top 16, they will advance to the next round of the mixed team category slated for July 24. In addition, their points are counted at the women's and men's singles.

The Tokyo 2020 Olympics will take place from July 23 to August 8. The Olympics is the largest sporting event in the world. It is held every four years, bringing together the top athletes from countries all over the world./.

Vietnamese athletes start competing at Tokyo 2020 Olympics have 412 words, post on en.vietnamplus.vn at July 23, 2021. This is cached page on Talk Vietnam. If you want remove this page, please contact us.