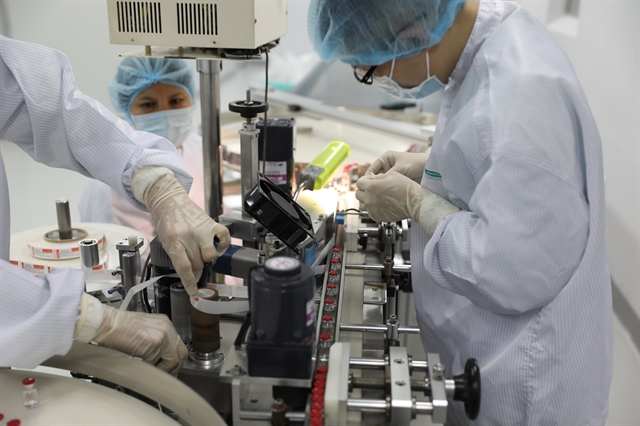 A test batch of COVID-19 vaccine Sputnik V vials bottled and packaged at Vietnamese Company for Vaccine and Biological Production No.1 (VABIOTECH) in Hà Nội in July during a test batch. — Photo courtesy of VABIOTECH

According to the official, one of the three was sealed between two Vietnamese companies – the Company for Vaccine and Biological Production No.1 (VABIOTECH) and the International Progressive Joint Stock Company (AIC) – and Japanese pharmaceutical firm Shionogi. VABIOTECH, a State-owned enterprise under the Ministry of Health, is one of the leading units in the field of research, manufacture and sale of vaccines and biological products for human use in the country.

Their deal targeted the transfer of the Recombinant SARS-CoV-2 Spike Protein, a baculovirus expression vector system, with the parties signing a confidentiality agreement to access vaccine and technology records.

Regarding the technology transfer project between the AIC and Shionogi, the Ministry of Health has signed a cooperation agreement and is preparing a plan to conduct the third phase of clinical trials in Việt Nam (via the National Institute of Hygiene and Epidemiology) and procedures for technology transfer (via VABIOTECH). It is expected that the vaccine will be completed and on the market in June 2022.

The second contract involving the Russian Sputnik V vaccine was inked between VABIOTECH, DS-Bio, and the Russian Direct Investment Fund, with the Vietnamese side in charge of packaging the vaccine tubes from the semi-finished products.

VABIOTECH has sent its sample tubes to Russia for quality checks. After related tests finish on August 10 as scheduled, Sputnik-V vaccine tubes would be produced under the contract at a volume of 5 million doses per month. It would start with 500,000 doses in August and later scale up to 100 million doses per year.

For technology transfer project with US partners, the Ministry of Health has sent a group of experts to coordinate with the World Health Organization (WHO) to support relevant units in completing dossiers for clinical trials according to a shortened process, with the research expected to start on August 1 and end in late December.

Vingroup controlled-VinBiocare is reported to be in negotiations with Arcturus Therapeutics, maker of a mRNA COVID-19, for the phase 3 trials in Việt Nam and subsequent production.

The transfer and the building of a vaccine factory in Việt Nam will be completed in June 2022. — VNS

Việt Nam signs vaccine technology transfer contracts with Japan, US and Russia have 648 words, post on vietnamnews.vn at July 28, 2021. This is cached page on Talk Vietnam. If you want remove this page, please contact us.