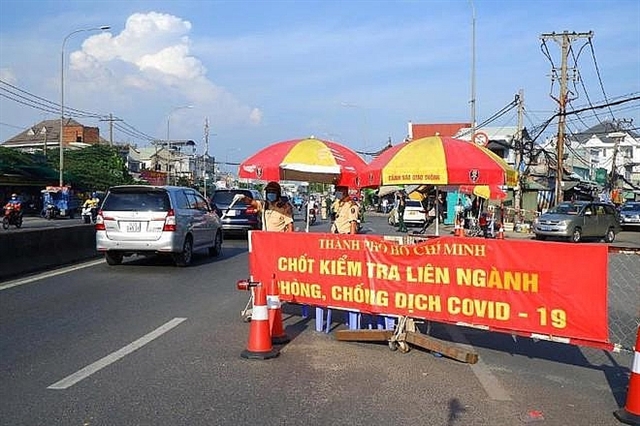 A HCM City gateway pandemic checkpoint. Transport departments of HCM City and provinces must work to ensure smooth circulation of essential goods as ordered by the Ministry of Transport. VNA/VNS Photo

HCM CITY — The transport departments of HCM City and all provinces must work to ensure the smooth circulation of essential goods, while the ministries of Industry and Trade, and Agriculture and Rural Development will maintain supply chains during social distancing regulations under Government Directive 16.

Speaking at an online meeting between the ministry and 63 provincial transport departments on Friday, Minister of Transport Nguyễn Văn Thể asked HCM City and all provinces to follow the Ministry of Health's guidelines to control people and trucks travelling between cities and provinces while ensuring circulation of goods.

According to Thể, only trucks with essential goods are allowed to travel during the lockdown period under Directive 16. Vehicles must have QR codes when traveling through HCM City's gateways and other provinces under Directive 16.

Thể ordered HCM City and surrounding provinces to provide favourable conditions for truck drivers to get tested and ensure smooth movement between cities and provinces.

Local authorities must also oversee businesses that transport goods and conduct rapid COVID tests or RT-PCR tests for truck drivers and their helpers.

According to the city’s transport department, while traffic volume at the city gateways has fallen by 70 per cent compared to the time before Directive 16, traffic congestion has eased.

On July 22 and 23, traffic at the city's gateway checkpoints moved smoothly, according to the Directorate for Roads.

In 19 southern cities and provinces under Directive 16, trucks are currently required to carry logos and QR codes that allow access to their medical declarations before they are permitted to enter or leave pandemic checkpoints.

According to the city’s transport department, as of 12am on July 23, more than 53,000 QR codes had been issued to vehicles to facilitate the transportation of essential goods.

The country's largest city on July 9 reopened 12 pandemic checkpoints at city gateways when it started the social distancing period, which has been extended to August 1. The checkpoints are operated by local police, army forces, health staff and interdisciplinary forces.

Police forces have been mobilised to ensure security and order at the checkpoints, and in isolation and lockdown areas in the city. They are also working with medical staff to trace suspected COVID cases.

The Việt Nam Logistics Business Association (VLA) has asked the city government and agencies to remove difficulties for logistics businesses as all drivers must have QR codes when passing through pandemic checkpoints at city gateways.

According to VLA, more than 70 per cent of container trucks have not been issued QR codes, although most of them have registered for them.

The delay in issuance of the QR codes will cause serious disruptions to the supply chain of goods, as well as congestion at seaports and industrial parks, according to VLA.

During the recent difficult period of goods circulation between HCM City and surrounding provinces, transport enterprises said that container trucks from HCM City to other provinces in the central region, Central Highlands, and Mekong Delta region often ran empty when they travelled back to HCM City.

Nguyễn Ngọc Thanh, director of Kim Phát Transport Company in District 12, recommended that empty trucks should transport agricultural products and vegetables from the provinces back to HCM City. They would then be gathered at wholesale markets or transshipment points for delivery within the city.

Each container truck can carry up to 30 tonnes of farm produce, he said.

A goods container truck from HCM City to Vĩnh Long Province, more than 100km from HCM City, can cost VNĐ5 million (US$220) one way (but the truck carries nothing on its way back to the city).

Businesses are willing to reduce freight rates by 50-60 per cent or even lower to transport farm produce on the way back to the city. Container trucks travel non-stop mainly at night, so farm produce cargo can arrive in HCM City early morning the next day.

Lâm Đại Vinh, director of Lâm Vinh Co., Ltd in District 7, said that transport businesses were ready to transport farm produce on the way back to HCM City to help reduce the scarcity of essential goods in the city.

Bùi Văn Quản, chairman of the HCM City Cargo Transport Association, said the association has been working with the city Department of Transport and the Department of Industry and Trade on a plan to use empty containers trucks to transport essential goods, mostly fruits and vegetables, from HCM City to other provinces and vice versa.

Transport departments to ensure smooth circulation of essential goods have 1021 words, post on vietnamnews.vn at July 25, 2021. This is cached page on Talk Vietnam. If you want remove this page, please contact us.