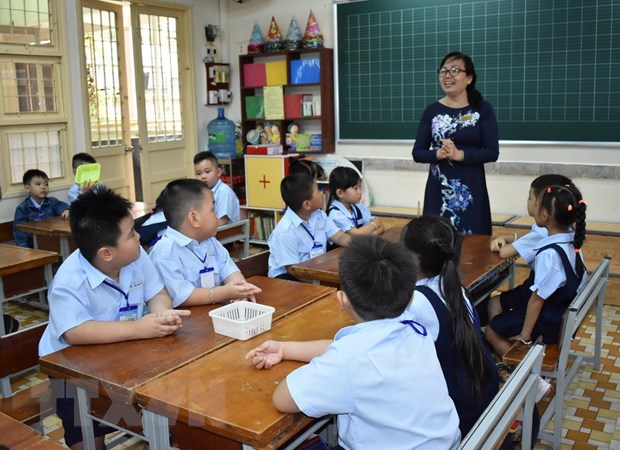 HCM CITY — Primary schools in outlying districts in HCM City are struggling to arrange enough classrooms for first graders to study a full day in the upcoming academic year due to population growth in city districts.

With an annual migrant growth rate of 13 per cent, Bình Chánh District provides schooling for additional 4,000 migrant students in all grades every year.

Schools in the district cannot offer full-day classes for first to fifth graders at seven primary schools in Vĩnh Lộc A, Vĩnh Lộc B and Phạm Văn Hai communes due to a lack of classrooms, according to Nguyễn Trí Dũng, head of Bình Chánh District's Education and Training Office.

All primary and secondary schools in the district have stopped receiving registration directly at schools, but have adopted online registration for first grade and sixth grade students due to social distancing requirements.

With a new 300-class primary school to open in the upcoming academic year, the district has enough seats for all first-grade students.

However, only 60 per cent of first to second graders will attend full-day classes and the remaining 40 per cent will study only half a day because of the high number of students.

Around 70 per cent of third to fifth graders will study only half a day.

In Gò Vấp District, there are not enough classrooms for primary schools to carry out the new training programme, which requires students to study during the day and classrooms to have no more than 35 students each.

In the 2020-21 academic year, only 70 per cent of first graders in the district studied during the day.

The district has no new schools, making it impossible to expand the number of classrooms for the new training programme.

The increased population in District 12 has also created a challenge for the local education sector to carry out requirements of the new training programme.

Khưu Mạnh Hùng, head of the district's Education and Training Office, said it remained a great challenge for the district to arrange enough classrooms for more than 9,000 first graders in the upcoming academic year as no new primary school projects have been carried out.

Online applications for first grade enrollment have reached more than 70 per cent, and enrollment for the sixth grade has been completed.

The list of students entering the first and sixth grades will be announced by the end of this month. —VNS

Primary schools struggle to offer full-day study have 702 words, post on vietnamnews.vn at July 21, 2021. This is cached page on Talk Vietnam. If you want remove this page, please contact us.