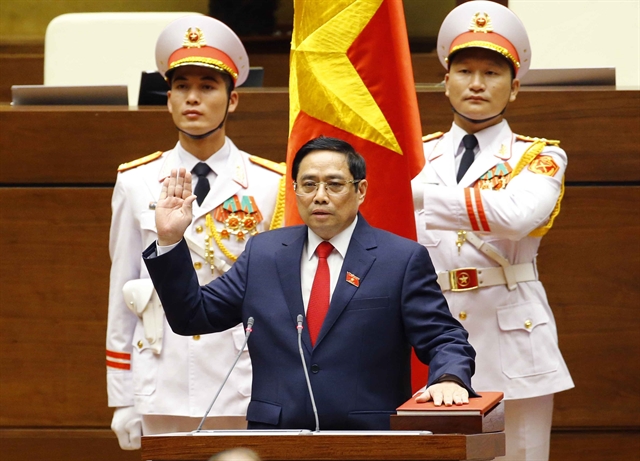 HÀ NỘI — Phạm Minh Chính, 63, was re-elected as the Prime Minister of Việt Nam for the next five years by the ongoing first session of the 15th-tenure National Assembly Monday afternoon in Hà Nội.

All 479 deputies present the plenary session (95.99 per cent of this tenure’s total) cast their votes in favour of adopting the resolution on Chính’s re-election for the 2021-26 term.

"Under the nation's sacred red flag and yellow star, in front of the National Assembly and people across the country, I, Prime Minister of the Socialist Republic of Việt Nam, swear to be absolutely faithful to the country, to the people, to the Constitution, and strive to fulfil the mission assigned by the Party, State and people,” Chính read.

National Assembly Chairman Vương Đình Huệ on behalf of the country’s parliament acknowledged the oath and offered his congratulations and presented flowers to the new Prime Minister.

In his inauguration speech, Chính stressed the current priority goal of containing the coronavirus through national unity and a sense of civic duty and implementing the vaccine strategy, adding that the Party and State understood and sympathised with the people with regards to the mental and financial toll as a result lockdowns and quarantines.

He reiterated the pursuit of the double goals of pandemic control and socio-economic development, and pledged to continue to put forward mechanisms and policies to support the people and businesses affected by the pandemic.

The new Government leader also underlined the need to build a pure, strong, capable Party and leadership, reform State governance, and create an environment to encourage the people and businesses to contribute to national development and protection.

Chính said the new Government would continue to fully flesh out the parameters of the Socialist-oriented market economy, with first and foremost tasks being to eradicate policy and institution ‘bottlenecks’ and ‘barriers’ that hamper economic activities, followed by restructuring the economy, enhancing resilience on the basis of self-reliance and internal strength, as well as bettering the investment and trade environment towards openness, convenience, transparency, and fairness for players from all economic sectors. 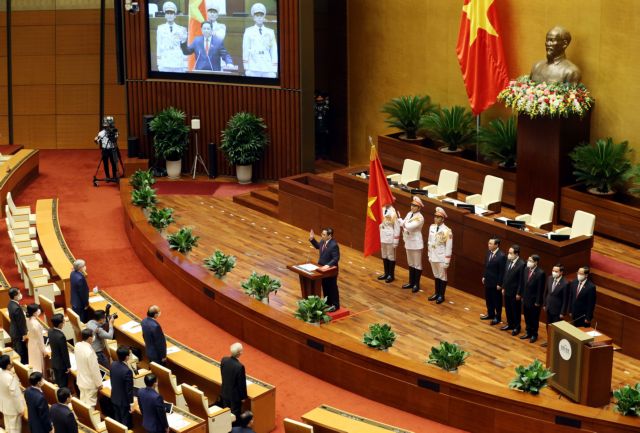 An overhead view of the ceremony. — VNA/VNS Photo Doãn Tấn

Chính also focused at length on the green economy, environmental protection, and climate change, as well as education and training and innovation to drive up labour productivity and the national economy’s competitiveness, as well as realising national and social digital transformation.

“The people will be at the front and centre, concurrently the subject and the ultimate goal and the driving force of development. We will not sacrifice progress and social justice or cultural values or environmental protection in pursuit of raw economic growth,” Chính said, adding that there would be ample attention on poverty reduction, and raising social welfare and social security for the people.

He is also committed to implementing the foreign policy of independence, diversification, multilateralisation of international relations and deepening of international integration, reaffirming Việt Nam as a trusted partner and a responsible member of the international community.

Territorial disputes will be handled via peaceful measures based on international law, he said.

Phạm Minh Chính, from the central province of Thanh Hoá, is a member of the Party Central Committee in the 11th, 12th and current 13th tenures, a Politburo member in the 12th and 13th tenures and a National Assembly deputy in the 14th and 15th tenure.

Before 2010, he mostly worked in intelligence roles at the Ministry of Public Security, culminating in the role of deputy head of the General Department of Intelligence, and became deputy minister in August 2010.

From August 2011, he served as Secretary of Quảng Ninh Province Party Committee. Since 2016, he was appointed Chairman of the Communist Party of Việt Nam Central Committee’s Organisation Commission.

He was voted in as Prime Minister in April this year during the 14th-tenure National Assembly’s last session. — VNS

Phạm Minh Chính confirmed as PM: pledges reforms, balanced development have 790 words, post on vietnamnews.vn at July 26, 2021. This is cached page on Talk Vietnam. If you want remove this page, please contact us.