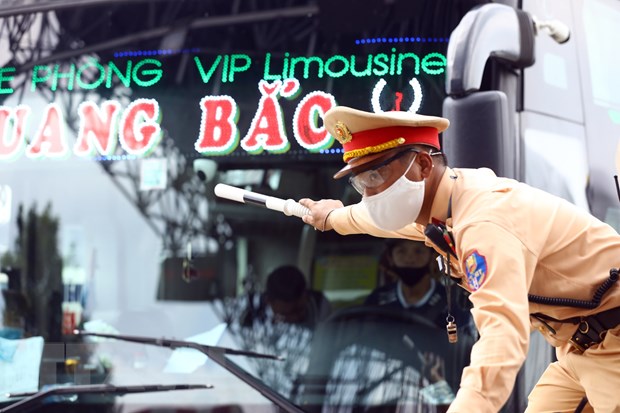 HÀ NỘI – The capital city's functional forces are deploying a number of  solutions to prevent congestion at gateways to the capital, Trần Hưng Hà, Director of the No.1 Road Administration Department has said.

On the first day under stricter social distancing measures required under Directive 16, congestion had been reported at a number of checkpoints leading into and out of the city, notably the Pháp Vân-Cầu Giẽ Highway.

Hà said that because the city implemented the stricter social distancing requirements from the early hours of the morning, many vehicles that were not allowed to enter the city were forced to turn around at the checkpoints creating congestion.

On social media, a number of drivers complained about the snap decision saying that they did not have enough notice to rearrange their plans.

Hà did however note that by early afternoon the capital city's checkpoints had mostly cleared.

To relieve congestion at hot spots like the Pháp Vân-Cầu Giẽ toll station, a representative of the Department of Transport said a new checkpoint would be set up in the area bordering Hà Nam Province.

Vehicles that are not eligible to enter the city will also be allowed to turn around immediately, according to the official.

Only priority vehicles carrying essential goods are allowed through COVID-19 quarantine checkpoints. These are identifiable by QR codes.

People travelling in personal vehicles that wish to enter Hà Nội, need to prepare their citizen identification, a negative test for COVID-19 issued within 72 hours, a certificate of vaccination, documentation confirming the expiration of their quarantine period (if applicable), and to fill out a medical declaration form on the Hà Nội Police Portal. VNS

New checkpoints to ease congestion entering capital city have 577 words, post on vietnamnews.vn at July 24, 2021. This is cached page on Talk Vietnam. If you want remove this page, please contact us.