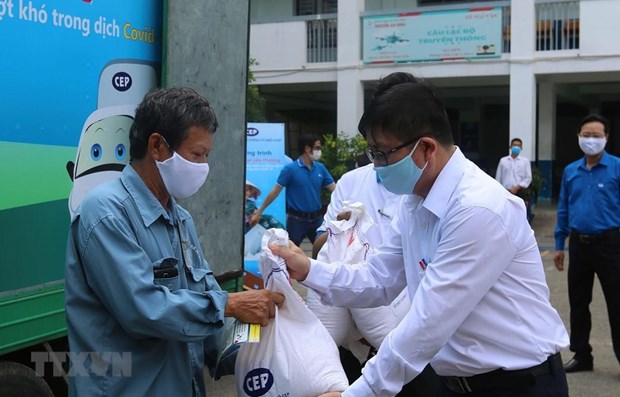 A man losing his job due to the COVID-19 pandemic receives aid in Ho Chi Minh City (Photo: VNA)

Hanoi (VNA) – Minister of Labour, Invalids and Social Affairs Dao Ngoc Dung has asked provinces and cities not to wait but immediately take action to distribute aid from the relief package worth 26 trillion VND (over 1.1 billion USD), recommending procedures be cut to accelerate the implementation.

He made the request at a meeting held by the Ministry of Labour, Invalids and Social Affairs (MoLISA) in Hanoi on July 14.

Localities nationwide have been mapped out implementation plans for these documents. Notably, some provinces and cities with the complex COVID-19 situation have been working promptly to ensure that no one suffers from hunger.

Ho Chi Minh City is the only locality that had started to help people facing difficulties due to the pandemic even before Resolution 68 was promulgated. On June 25, the municipal People's Committee approved an aid package worth 886 billion VND targeting six groups of people, including 230,000 freelancers, affected by the coronavirus resurgence.

Le Minh Tan, Director of the municipal Department of Labour, Invalids and Social Affairs, said in the first phase, the city gave a maximum aid of 50,000 VND per day for each freelancer affected by the 30-day social distancing from May 31 to June 29. The second-phase support, 50,000 VND per person each day, will benefit those affected by the 15-day stricter social distancing under the Prime Minister's Directive 16.

He noted that 46 percent of the targeted freelancers had received aid as of July 13, and the city looks to finish delivering the first-phase relief by July 15 while concurrently providing the second-phase assistance.

Relevant agencies have created the best possible conditions and simplified procedures for people, enterprises, and small traders to get the aid.

In nearby Dong Nai province, the imposition of social distancing under Directive 16 has resulted in a relatively large number of freelancers losing their jobs, about 30,000. The local administration plans to provide them with financial aid of 1.5 million VND per person, costing about 45 billion VND in total.

Nguyen Thi Thu Hien, Director of the provincial Department of Labour, Invalids and Social Affairs, said Dong Nai has issued a decision and plan on implementing the Government's resolution. It has also sent guidance to help businesses handle related procedures for their employees.

Not only HCM City and Dong Nai but other localities such as Bac Ninh, Bac Giang, Binh Duong, Da Nang, and Ba Ria – Vung Tau have also made detailed implementation plans and issued particular support policies for freelancers.

While many localities have made proactive moves to carry out aid packages, some haven't. One week after the Government issued guidance on the implementation of the resolution, only 33 out of the 63 provinces and cities nationwide submitted their worker assistance plans. 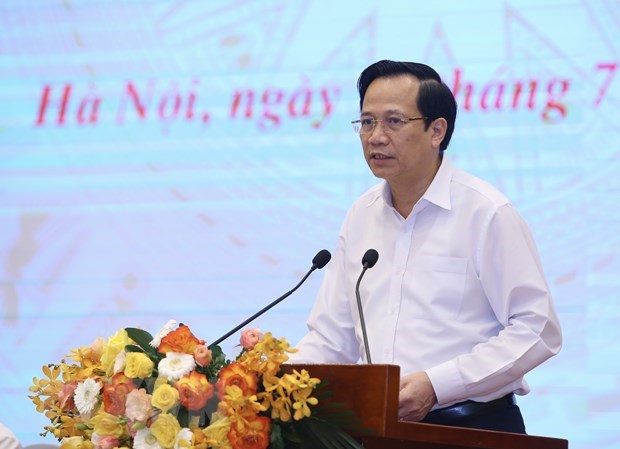 Minister Dung requested provinces and cities immediately carry out policies supporting workers, especially freelancers, and reduce procedures so that the aid can reach the pandemic-hit people as soon as possible since many places are suffering from social distancing, quarantine, and business and service suspension.

Regarding Hanoi, which reportedly has yet to issue an implementation plan, he said since the capital has put a halt to many business activities and services twice within one month, it needs to swiftly carry out support policies, especially for freelancers, and not issue additional procedures or documents.

Apart from financial aid, the minister also suggested localities provide relief in other forms such as setting up "rice ATMs" or opening zero-dong supermarkets because amid social distancing, people may still be unable to buy essential goods and food even when they have money./.

Immediate action required to deliver aid to pandemic-hit people have 762 words, post on en.vietnamplus.vn at July 15, 2021. This is cached page on Talk Vietnam. If you want remove this page, please contact us.