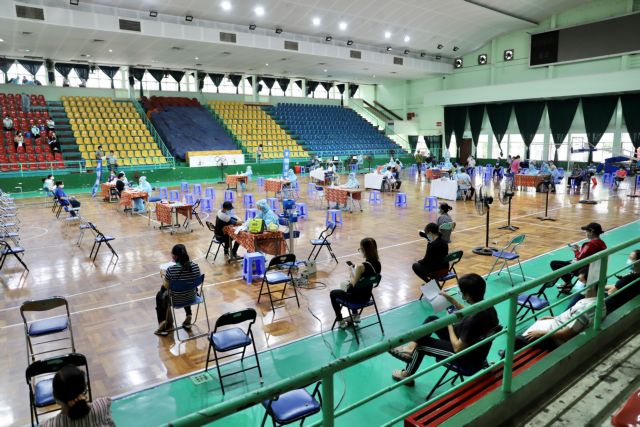 People waiting to get vaccinated in a gymnasium in HCM City on July 22, 2021. — VNA/VNS Photo

HÀ NỘI — Amid soaring coronavirus cases in Việt Nam as the fourth wave of infections ravages across the country, people have been getting up in arms about a privileged few who seem to be arranging opt-outs from lockdowns and jumping the vaccination queue, while the majority of the country diligently follows the rules.

Earlier this week, HCM City's Phú Nhuận District issued an administrative fine for a director of an environment service cooperative for issuing a pass to his daughter to freely navigate the city. Such passes should be reserved for garbage collectors only.

HCM City is under a strict lockdown order to contain a worsening outbreak that has reached 50,000 infections and threatens to overwhelm its healthcare capacity. Non-essential businesses are closed and people have to stay at home and go out for essential purposes only.

Yet this woman posted on social media about how, within just 20 minutes, her father was able to obtain her a pass for her and her husband to roam the city freely, without fear of being fined by patrolling officers, for 15 days.

The director attempted to explain things away, saying a heavy workload meant he had to enlist his daughter to help with some paperwork and that the pass was written by her as "just a joke" among friends and did not hold any actual value. Authorities saw things differently.

Also this week, a screenshot showing a photo of a popular businesswoman getting a vaccine simply because she knew the leader of Saint Paul Hospital in Hà Nội was widely shared. An uproar ensued.

Đỗ Đình Tùng, deputy director of the hospital, later explained saying the woman was a "contributor" to the Medical High-tech and Digestive Centre in charge of the centre's publicity, putting her in a high risk group. The public were, no doubt, skeptical.

And most incendiary of all, a 25-year-old woman, famed for winning a beauty prize at a university in Hà Nội, claimed she was given preferential choice for the vaccine via back door connections.

"The pandemic is getting scarier, Astra is fine but I and husband are waiting for Pfizer shots as our preference, last night the news said Hà Nội was to enforce lockdown and my grandparent called to let me know I could have my shot tomorrow and assured that it’s a Pfizer vaccine to my great relief,” she wrote on July 19. "With one dose, I feel much more at ease. Thanks to my grandparents who are always there when their kids are in need."

People were furious about the alleged queue jumping, the vaccine snobbery, her “ability” to choose a vaccine of her liking, and the hints of nepotism, and demanded an account of the how and why, as well as a review of the administration of vaccines to ensure that the few available doses in the country go to the right people, to not have vulnerable groups and pandemic-hit regions left waiting.

The Việt Nam-Soviet Friendship Hospital explained she was the recipient of a leftover unused dose at the end of the working day, only after when someone in the registration did not show up or doctors advised delaying the shot due to some medical problems detected through pre-vaccination medical examination. They added that her father worked at a medical university and had one of his students at the hospital put his daughter's name down for the vaccine. They stressed that specifically getting the Pfizer vaccine was a lucky coincidence.

This did not wash with the health ministry, which issued a short announcement that the hospital has taken disciplinary action against one of its medical staff and they had been "transferred to another job,” and forwarded the case to the Ministry of Information and Communications to determine further whether her post carried false information that caused confusion among the public about the vaccination procedures.

It should be noted that even though the Government has set aside budget for vaccine purchases, it is also relying on the National COVID-19 Vaccine Fund that draws on voluntary contributions from businesses and people in the country.

The procurement of the Pfizer vaccine is also sourced from this fund, so any misuse of the shots would be a legal problem and ethical issue. More action and supervision are needed to prevent another recurrence of such a case as any explanation after-the-fact will simply be too little too late.

People only know about these cases because of bragging on social media, and, let's be honest, there are likely to be other similar cases on the down low.

It is hard to police every shot, but with that being said, Prime Minister Phạm Minh Chính's order for an inquiry and health ministry inspectors getting involved in cases of ineligible vaccinations should serve as sufficient deterrents. Hospitals who are thinking of pulling the strings to get people ahead of the queue would be well advised to consider whether it is worth the troubles.

Not to be a doomsayer, but while an increasingly intense outbreak forces authorities into further restrictions that could lead to lockdown fatigue and a huge impact on people's livelihoods, the last thing the country needs is a series of incidents and unfairness that could undermine trust and confidence, when unity and public buy-in is the critical force that is so needed right now to power us through this chapter of the challenge. — VNS

Gaming the system only damages attempts to tackle COVID-19 outbreak have 1158 words, post on vietnamnews.vn at July 23, 2021. This is cached page on Talk Vietnam. If you want remove this page, please contact us.