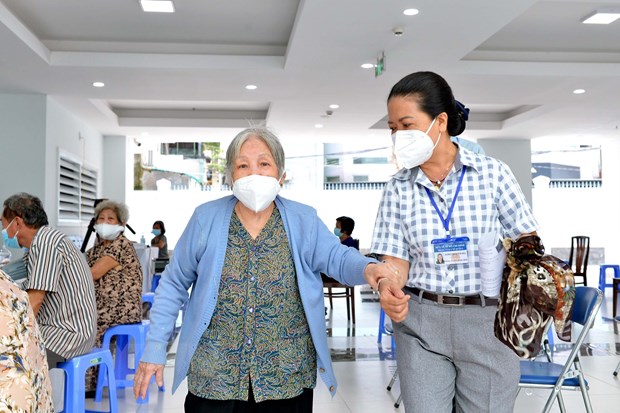 HCM CITY — HCM City is distributing its fifth batch of vaccines and giving priority to people over 65 years old, and people who have made a great contribution to the nation and the poor.

The city has been allocated more than 930,000 doses of three kinds of vaccines including AstraZeneca, Moderna and Pfizer.

The Vietnam News Agency is reporting that in different districts of Thủ Đức City, local residents were eagerly waiting for their turn to receive their injection.

Nguyễn Minh Hải, 60, a motorbike taxi driver living in Bình Chánh District, was among those to be in these priority groups. After receiving his vaccination he felt relieved because his work required him to come into contact with a lot of  people.

Hải said that during the  pandemic, it was very difficult for him to earn a living. He said he had never even considered getting a vaccination because it was so rare.

"Being given priority to be vaccinated is really a great gift for poor people like us," said Hải.

Similarly, Lê Văn Danh, 62, from District 3, could not hide his happiness when he received an invitation from the ward authorities to receive a vaccine.

Danh sells fried cakes, due to social distancing restrictions he has been unable to operate his business for the past two months.

"I used to served in the army and was a part of the war at the southwest border, but still feel nervous about being vaccinated," he said.

Danh expressed his hope that the city would acquire more vaccines to give to the poor.

The vaccination process is being carried out at 615 sites in 312 wards and commune health stations. On average, each site can inject 120-200 people per day.

Nguyễn Hoài Nam, deputy director of the HCM City Department of Health, said that medical staff would spend a lot of time on pre-injection screening and post-injection monitoring.

Hoàng Thị Lan, 83, who lives in Gò Vấp District, said despite her age, underlying diseases and high blood pressure, she was still very happy to receive a vaccination.

“I’m worried, but I still believe that the medical teams, doctors and authorities will create the safest conditions for more people, especially the elderly, to be vaccinated going forward,” she said.

To ensure the health of recipients, many localities such as Districts 1, 3, 5, 11, Phú Nhuận and Gò Vấp have also organised online registrations, sorting them by age and underlying diseases, then calling them to schedule their injections.

All of the vaccine sites are prepared to respond quickly if an emergency occurs.

The HCM City Department of Health said that in special cases after injection, for elderly people with underlying diseases, localities also call them to ask for their health status and give them directions to treat mild reactions to the vaccine.

So far the city has injected more than 170,000 doses of COVID-19 vaccine in this fifth period, reaching 60 per cent of expected capacity.

Nearly 200 people have had reactions after being injected, most of them were over 65 years-old and had underlying medical conditions, but they were all mild and were stabilised by medical staff. — VNS

Fifth distribution of vaccines in HCM City to include elderly, poor have 875 words, post on vietnamnews.vn at July 30, 2021. This is cached page on Talk Vietnam. If you want remove this page, please contact us.