On July 23rd, Egypt commemorates the Revolution of 1952, celebrating its 69th anniversary this year. The revolution, which became the key event that shaped modern political history in Egypt, significantly influenced other countries in different parts of the world. Notably those who were struggling to achieve their independence and take a stand against colonialist and imperialist domination. The first Egyptian republic was established to soon assume a leading role among developing nations. This manifested into Egypt becoming one of the central founding nations of important international movements and regional organisations, including the Non-Aligned Movement (NAM) and the Organization of African Unity (OAU), today's African Union (AU).

A few years earlier, the revolutionary leader and late President of Vietnam Hồ Chí Minh visited Egypt. He realised that Egypt and Việt Nam shared common values, cultural heritage, along with their aspirations for independence. He believed that the similarities between the two nations, whose ancient civilisations had developed around river deltas, could embrace the seeds of a long and fruitful relationship. This would be based on mutual understanding, and deep respect, which was later reflected in his teachings, guiding Vietnamese leaders ever since. 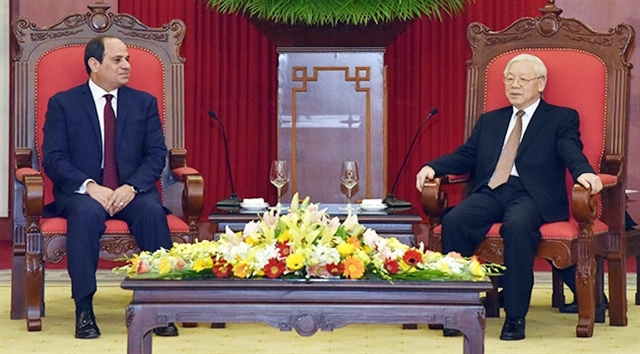 In the Bandung Conference in 1955, the Egyptian leader, Gamal Abdel Nasser, and Hồ Chí Minh met to contribute, with other influential leaders, to uphold efforts seeking national unity and independence. In 1963 diplomatic relations were established between Egypt and Việt Nam.

Despite the geographical distance, a thorough look reveals significant similarities between Egypt and Việt Nam. Both are proud to be among the oldest civilisations in the world. Both had the moral strength to face the dominant powers to achieve their independence. They both have an almost identical size of population, nearly 100 million people, and both are going through a similar phase of socio-economic development, striving to become high-income countries in the coming decades.

As the Ambassador of Egypt to Việt Nam for more than three years, I can confidently say that the shared human and social values between the two peoples are profound. Both peoples recognise national solidarity as key to development, and stand firmly against corrupt and subversive thoughts. Both share deep respect for society, traditions, and treasure the sacrifices of the heroes of their respective nations.

The friendship between Egypt and Việt Nam had its highest political manifestation in the historical exchange visits of H. E. President Abdel Fattah Al Sisi to Việt Nam in September 2017, and the visit of the late president H.E. Trần Đại Quang to Egypt in August 2018. These visits contributed further momentum to bilateral relations. This was reflected in the growing political mutual support on the international arena, where Việt Nam has continued to play an active role as a non-permanent member of the UNSC (2020-2021), after ending its successful ASEAN chairmanship in 2020.

Bilateral developments were also shown in the increasing volume of trade between the two countries, which reached approximately half a billion US dollars in 2018 for the first time, and maintained it over the next years. This was despite the challenges imposed by the COVID-19 pandemic. The two sides are looking forward to soon achieving the goal of reaching a bilateral trade volume of US$1 billion.

Cultural and people to people exchange has always been a main pillar for bilateral cooperation. Recent cultural activities included the performance of the Egyptian water puppet troupe in Hà Nội and Việt Nam's participation in the World Youth Forum in Egypt. Vietnamese students also continue to choose Egypt as one of their favorite destinations to study the Arabic language, which further contributes to raising awareness among the youth about the friendship between our two nations. 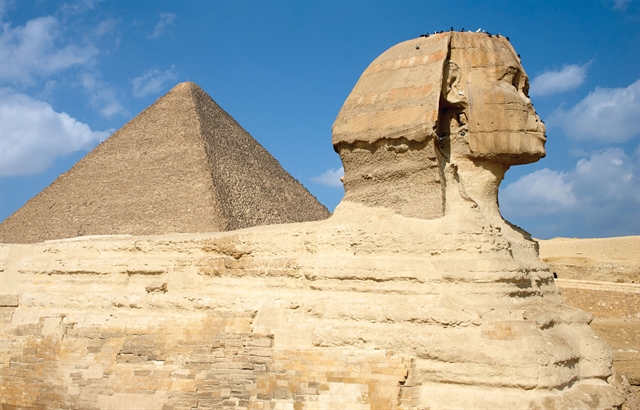 Side view of the Sphinx with the Great Pyramid of Khufu (Cheops) rising in the background at Giza, Egypt. — Photo britannica.com

While Egypt is looking ahead to a prosperous future under the leadership of H. E. President Abdel Fattah Al Sisi, Egyptian national priorities remain focused on achieving sustainable development, while resolutely facing increasing traditional and non-traditional challenges. These include fighting the covid-19 pandemic, combating terrorism, ensuring national security, enhancing relations in the regional and international spheres, and ensuring the sustainable use of water resources.

The Egyptian government is implementing a comprehensive development plan, which includes unprecedented megaprojects. Economic reforms and modern legal frameworks are adopted to create a friendly environment for foreign investments in priority sectors in particular energy, logistics, and telecommunication. This represents an opportunity for Vietnamese companies to expand their investments in Egypt for the benefit of both sides.

I extend my congratulations to Việt Nam on successfully holding the Thirteenth  National Congress of the Communist Party of Việt Nam and electing the leaders of the Party and the State. I also reaffirm that Egypt is looking with appreciation at the socio-economic achievements of Việt Nam over the last decades. I would also like to take this opportunity to reiterate my belief that under the current leadership, Egypt and Việt Nam are destined to work together successfully and the future is full of opportunities for the two peoples to reach their full potential and achieve their aspirations. — VNS

Egypt sees more co-operation opportunities with Việt Nam have 1083 words, post on vietnamnews.vn at July 22, 2021. This is cached page on Talk Vietnam. If you want remove this page, please contact us.