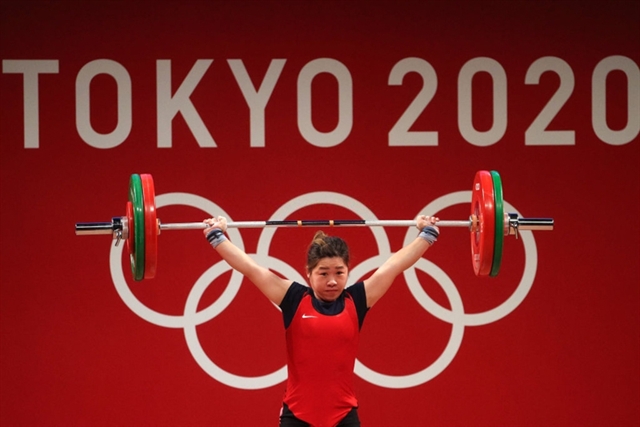 HÀ NỘI – Weightlifter Hoàng Thị Duyên failed to make the top three as expected after the end of the women’s 59kg category at the Tokyo Olympics yesterday.

Duyên, who was Việt Nam’s best hope of a medal, lifted 95kg in the snatch and 113kg in the clean and jerk. Her total of 208kg placed her in fifth position in the overall rankings at Tokyo's International Forum.

Prior to the Games, Duyên had the third-best result of 223kg among 14 competitors. But in yesterday’s performance, she lifted 15kg less than her best pushing her below the line.

The winner was Kuo Hsing-Chun of Chinese Taipei who made it 236kg in total. The lifter was in a different world as she set three Olympic records within half an hour.

World champion Kuo lifted 103kg in the snatch and 133kg in the clean and jerk for a total of 236kg a high bar to reach.

She left her other rivals far behind. Polina Guryeva from Turkmenistan placed second with 217kg. Andoh Mikiko of Japan came third with 214kg.

Duyên was the second and last Vietnamese weightlifter at the tournament. Earlier, her veteran teammate Thạch Kim Tuấn also performed poorly in the men’s 61kg and was not ranked because of three failed attempts in the clean and jerk.

In badminton, Vietnamese top player Nguyễn Tiến Minh was ousted from the tournament after his second loss in Group L of the men’s singles.

It is his fourth time at the world biggest-scaled sport festival, making the former world No 5 Việt Nam’s most-participated player in Olympic history. This will be his last Games as he plans to retire after this summer event.

The former Youth Olympic Games winner places at No 20 overall and was the only Asian athlete in this group. He did not advance to the top-eight finals.

Early yesterday morning, the rowing and archery activities were delayed because of a storm in Tokyo that affected all outdoor events.

On Wednesday evening, boxer Nguyễn Văn Đương will fight against Erdenebat Tsendbaatar of Mongolia in the men’s U57kg pool. This would be a tough fight for the Vietnamese champion as Tsendbaatar won a world championship bronze in 2019 and is Asian championship and Asian Games defending champion.

However, telling Việt Nam News , Đương said his win over Tayfur Aliyev of Azerbaijan in the first match last week had given his confidence a big boost on his Olympic journey.

Aliyev was considered a stronger competitor than Đương having won the European Championship bronze in 2015 and placed fifth at the World Championships in 2019.

“The win makes me more confident and I am really determined for the upcoming match. My own strong points, iron spirit, desire for victory and the pride I feel for Việt Nam give me the staying power I need to last longer in the ring,” he told Việt Nam News . VNS

Duyên finishes fifth, Đương ready to fight have 827 words, post on vietnamnews.vn at July 27, 2021. This is cached page on Talk Vietnam. If you want remove this page, please contact us.