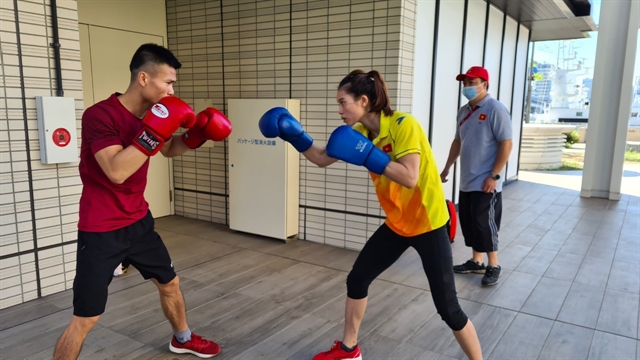 HÀ NỘI — It is time to show off, raise our voices and show that Việt Nam packs a mean punch when it comes to boxing. Vietnamese boxer Nguyễn Văn Đương plans to give it his all for his Olympic debut in Tokyo.

Đương brought an Olympic slot home after 32 years of waiting, with a successful bronze medal from a qualification tournament last March.

“I'm feeling very hopeful and excited. I'm looking forward to the day I get to compete,” Đương told Việt Nam News via Zoom. “I feel pretty good about what I have prepared for the games up to this moment. I can harness more than 100 per cent of my strength.”

It will be the first and biggest tournament in the career of the 25-year-old whose best achievement is a silver medal from the 2019 Southeast Asian Games in the Philippines. He is set to face some of the most powerful fighters from all over the world in the men’s featherweight category (57kg). 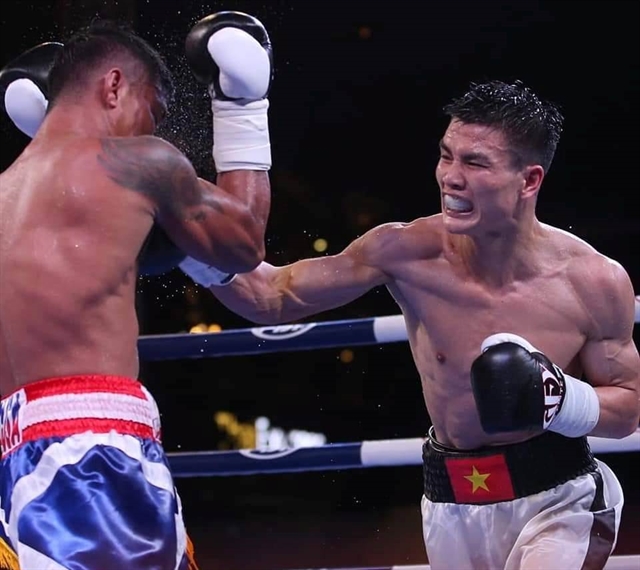 Nguyễn Văn Đương (right) fights against Jenel Lausa of the Philippines during the Victory 8 event in Hà Nội in 2019. — Photo danviet.vn

“I do feel nervous but just a little bit. My [weight] class gathers 27 athletes. To find out about each and every one of them is very difficult, so instead my coaches and I study different strategies," said Đương who set a Việt Nam record with a knockout after only 47 seconds against Thai Chatchai Decha Butdee in qualification in Jordan in March.

The Olympics has been delayed for one year giving Đương more time to sharpen his skills although no international training camps or competition have been held during this period.

“After getting my berth, we made up special plans for the Olympic journey. However, all were broken. Not having the opportunity to train abroad is a huge disadvantage, but my coaches and fellow athletes have helped me a lot,” said Đương.

“At the national team campus, I spar with teammates who all are champions of different weight categories from 49kg to 64kg. Facing different fighting styles also helps me to have a suitable adaption to rivals that I may meet in Tokyo.”

“Meanwhile, coaches gave me special exercises to improve my physique strength and technique while competition tactics are discussed regularly.”

Coming to Olympics as a freshman, Đương will suffer no pressure and intends to show a free mind and strong determination.

“I am given no target at the Games. Coaches want me to feel comfortable and try my best. My goal is to get a medal for Việt Nam. But whether I can do it or not depends on who I will compete against in the ring and many things that could happen during the match,” he said.

The only concern of the athlete now is to keep safe from the coronavirus pandemic that has touched the Olympic Village with several positive cases ahead of the opening ceremony.

“I do feel scared of the virus, but I also make sure to follow measures to protect myself like wearing face masks, washing hands regularly and not having too much physical contact,” he said. 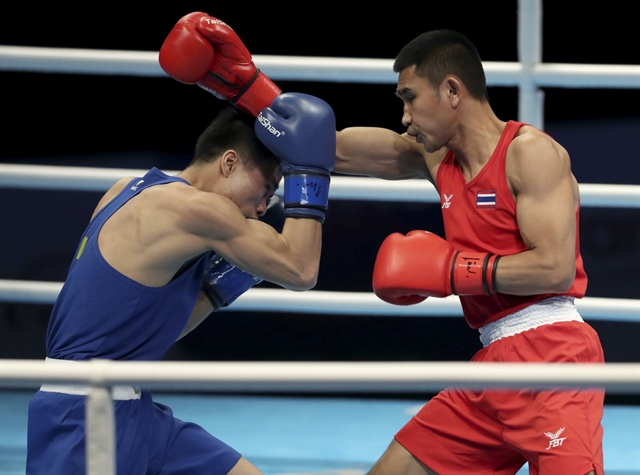 Đương will face 24-year-old Aliyev Tayfur of Azerbaijan, the world No. 9, in the first match on Saturday afternoon at the Kokugikan Arena. Considered one of his country's brightest talents, Aliyev began boxing at 10 and competed at the 2014 AIBA Youth World Championships. His best result was bronze at the Baku 2015 European Games and his highest ranking has been No. 5 in the world.

“This is a huge competition. And the scale of the games and the way they operate can make our athletes a little nervous. And that's normal,” national team head coach Đinh Phương Thanh told Việt Nam News .

“In terms of physical strength, we have prepared Đương the best we can. We don't know a lot about all competitors but Tayfur is really strong. If Đương can do as well as he does in practice, and if he wins any matches that would be great. There is nothing to worry at all. Just punch!” she said.

Đặng Hiếu Hiền was the first Vietnamese boxer at an Olympics, in 1988. The unknown athlete recorded a KO win over a Spanish Antonio Caballero. After 33 years, Đương is on the way to make his mark, and considers his senior’s victory a mirror to look at and try to do better.

“Boxing is now different and boxers are also not the same. I respect my senior’s achievement but will not let it be a pressure on my shoulders. I will step into the ring with an iron mind,” said Đương.

“I will give more than 100 per cent of myself on the ring. Việt Nam’s boxing is still tiny in the world but I am not afraid anyone. I will punch hard whoever my rival is, and I will not regret anything as I have given everything.” — VNS

Another Vietnamese boxer Nguyễn Thị Tâm will compete in the women’s 51kg class against Krasteva Stoyka Zhelyazkova of Bulgaria.

Her opponent is 35 and the 2018 European champion in the 54kg class. She won world championship silver in 2016 and 2018 and a fifth place at the London Olympics in 2012. In Tokyo, Zhelyazkova performed at 51kg.

Tâm’s match is on Sunday and expected to air live on VTV5 and VTV6. — VNS

Đương set to make Việt Nam's mark in Olympics boxing have 1331 words, post on vietnamnews.vn at July 24, 2021. This is cached page on Talk Vietnam. If you want remove this page, please contact us.