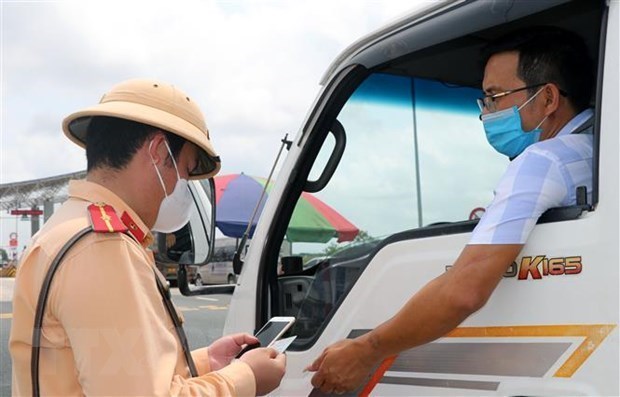 Hanoi (VNA) – The disruption of the Directorate for Roads of Vietnam's website for registration of "green lane" status of vehicles was caused by a security hole and system overload due to wrong calculation of users by the server management unit, not from cyber attacks, according to Ministry of Public Security's Spokesperson Lieut. Gen. To An Xo .

The website allows the online registration of "green lane" status granted to vehicles transporting essential goods. "Green lane" vehicles receive a QR code, enabling them to pass through COVID-19 medical checkpoints without lengthy waits. This aims to facilitate the smooth circulation of necessities throughout the nation amid the COVID-19 resurgence.

Lieut. Gen. Xo said an initial investigation showed that as the system was built in a very short time, the system service provider – An Vui technology company – failed to prepare security protection solution, while incorrect estimation of the number of users resulted in overload.

Although there was no cyber attack into the system, technical analysis showed that there are signs of illegal access to steal registration data, he said.

He added that the ministry has asked relevant agencies to recover the operations of the system.

Earlier, the Directorate for Roads of Vietnam said the website at http://luongxanh.drvn.gov.vn was reportedly attacked by hackers with about 500 requests per second on average, repeatedly crashing the system and preventing it from functioning normally.

It has disrupted the processing of applications for "green lane" status . Loads of complaints have been sent to the Directorate for Roads of Vietnam and local Departments of Transport nationwide as transport firms said that they could not access the website for hours.

The issue is considered serious given that a very large number of vehicles are applying for the "green lane" to go through the capital city of Hanoi, which has imposed social distancing order since early morning on July 24 to contain the spread of COVID-19./.

Disruption of website for “green lane” vehicle registration caused by system overload, security hole have 548 words, post on en.vietnamplus.vn at July 29, 2021. This is cached page on Talk Vietnam. If you want remove this page, please contact us.