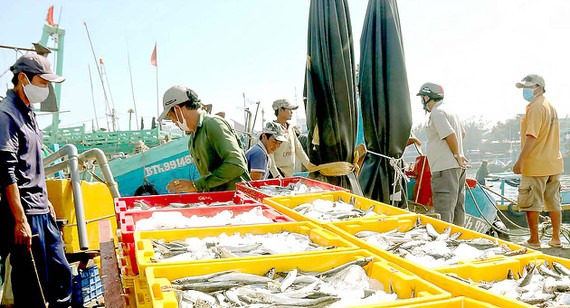 The seafood industry in Bình Thuận Province has experienced stable growth amid the pandemic. Photo courtesy of sggp.org.vn

HCM CITY — Bình Thuận Province, one of the four largest fishing grounds in Việt Nam, has achieved many positive achievements amid the pandemic.

The pandemic has affected most industries, but thanks to COVID-19 prevention and control measures, favourable weather, and cooperation among business firms, the fishing industry in Bình Thuận has been able to thrive.

While fishing output is not as high as expected in some coastal provinces and cities, Bình Thuận Province is doing quite well, with abundant seafood output.

Recently, boat owner Phùng Văn Tiến, together with his friends, arrived at Phan Thiết fishing port after more than a half month of fishing offshore.

"Everyone was worried the day we set sail. We were afraid that seafood products would not be sold because of the epidemic. However, after deducting all expenses, each boatman was able to earn nearly VNĐ10 million," Tiến said.

After handing over the fisheries products to purchasing units, the group of fishermen on Tiến's ship immediately contacted authorities to make medical declarations and report their sailing schedules, then returned to the ship to prepare for a trip in the next few days.

Similarly, Trần Út from Mũi Né Ward in Phan Thiết City said that he has been able to sell dozens of tonnes of anchovies to traders.

"Anchovy is now priced at VNĐ9,000 per kilo, which is a drop compared to the same period last year, but the difference is not that much. Since anchovies are important for traditional fish sauce and fish powder, large quantities of anchovies have sold," Út added.

Since the weather was favourable in the first six months of 2021, fishermen caught 19,000 tonnes of seafood, up 4.65 per cent over the same period last year.

Huỳnh Quang Huy, director of the Bình Thuận Province Fisheries Sub-Department, said that fishing output at the locality is estimated at about 100,000 tonnes, up 20 per cent year on year.

According to the provincial Department of Agriculture and Rural Development, fishing, trading and exchanging seafood in the locality are still under control, partly because the province has taken the initiative in epidemic control and prevention while businesses and buying units have joined hands to secure the seafood caught by local fishermen.

Đỗ Văn Thanh, director of Bích Thanh Company in Phan Thiết City, said that the outbreak, especially in HCM City, has affected the consumption of seafood in Bình Thuận Province.

"However, we still try our best to buy fisheries products for fishermen, then put it in cold storage for preservation and wait for favourable conditions to sell," he said.

An owner of a purchasing facility at La Gi Fishing Port added that fishermen are his long-term customers. When they face difficulties, he has to find a way to support them as much as he can.

"Many businesses here are operating at full capacity to buy fisheries products for locals," he said.

Although export processes to China and South Korea have been affected due to complications of the COVID-19 pandemic, active purchasing from local fish-sauce production facilities have saved the anchovy output.

However, the storage and processing capacity of these units might pose a challenge in the near future. With the increase in gasoline and oil prices, relevant authorities should consider supporting fuel prices and storage costs to save the industry. — VNS

Bình Thuận fishing industry thrives amid pandemic have 848 words, post on vietnamnews.vn at July 27, 2021. This is cached page on Talk Vietnam. If you want remove this page, please contact us.