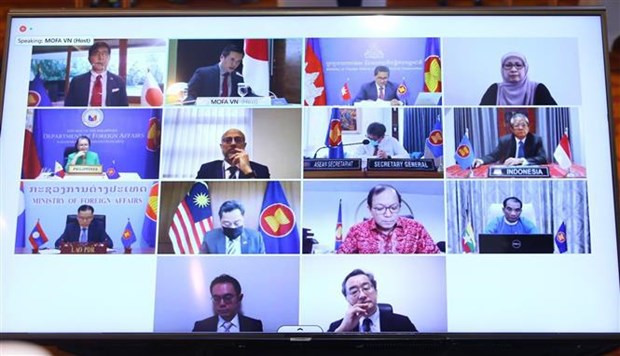 Hanoi (VNA) – The Vietnamese Ministry of Foreign Affairs, as a coordinator for ASEAN-Japan relations, organised a virtual high-level roundtable themed "ASEAN-Japan: Reviewing the journey travelled, toward the 50th anniversary of dialogue partnership " on July 21.

The roundtable saw the presence of ASEAN Secretary General Lim Jock Hoi, senior officials of ASEAN countries and Japan, Ambassadors of Japan and ASEAN member states to Hanoi, and representatives from Vietnamese ministries, the Asian Development Bank (ADB) and the Japan International Cooperation Agency (JICA) and the region's leading scholars and researchers.

This is Vietnam's initiative to create an opportunity for ASEAN countries and Japan to look back on the five decades of cooperation and put forward orientations for the next period.

In his opening remarks, Vietnamese Foreign Minister Bui Thanh Son said that Japan is a reliable friend and partner of ASEAN, and the ASEAN-Japan Strategic Partnership is one of the most meaningful and comprehensive relationships of ASEAN with its partners, spanning through various fields for peace and prosperity, and for the quality of life. 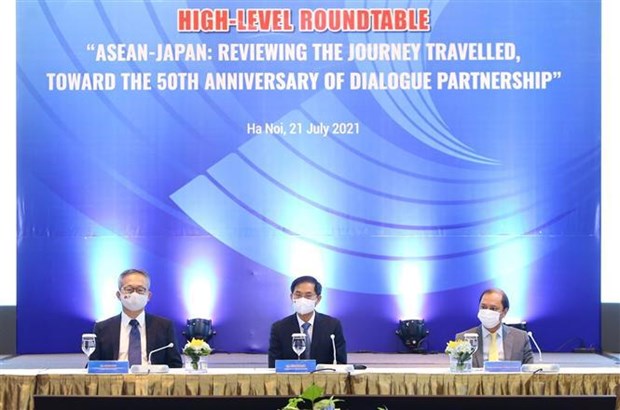 The Vietnamese delegation at the event (Photo: VNA)

Reiterating the doctrine initiated by Japanese Prime Minister Fukuda in 1977, Son welcomed Japan to promote a partnership based on trust, mutual respect and win-win cooperation with ASEAN.

He emphasised the importance of economic, trade and investment cooperation as the foundation for ASEAN-Japan relations, appreciating Japan's development cooperation, technical assistance and timely and valuable support for ASEAN countries, including Vietnam, especially in narrowing the development gap, the development of sub-regions, and the response to the current COVID-19 pandemic.

The Vietnamese representative pointed out the potential for collaboration between ASEAN and Japan in the coming decades, based on the common values of open economic linkages, and promoting a rules-based and people-connected regional structure that ASEAN and Japan share.

Vietnam always strives to contribute to building a “heart-to-heart” relationship on the basis of mutual trust and equal partnership between ASEAN and Japan, he added.

Japan's First State Minister for Foreign Affairs Washio Eiichiro expressed his gratitude for and appreciated contributions of Vietnam as the coordinator for ASEAN-Japan relations since 2018.

He affirmed that Japan steadfastly promotes its strategic partnership and effective cooperation with ASEAN to jointly respond to challenges from the rapidly changing and unpredictable regional and international environment.

He expressed his hope that both sides will focus on implementing the Joint Statement of the 23rd ASEAN-Japan Summit on Cooperation on ASEAN Outlook on the Indo-Pacific (AOIP), and shared Japan's plans to organise activities in celebration of the 50th anniversary of ASEAN -Japan relations, including a Commemorative Summit in Japan in 2023.

Deputy Foreign Minister Nguyen Quoc Dung, head of the Vietnam ASEAN SOM, emphasised major orientations to promote ASEAN-Japan relations in the coming time, and expressed his belief that Thailand, the next coordinator of ASEAN-Japan relations, will continue to maintain the momentum of cooperation and develop the ties to a new height./.

ASEAN-Japan roundtable looks toward 50th anniversary of dialogue partnership have 709 words, post on en.vietnamplus.vn at July 21, 2021. This is cached page on Talk Vietnam. If you want remove this page, please contact us.