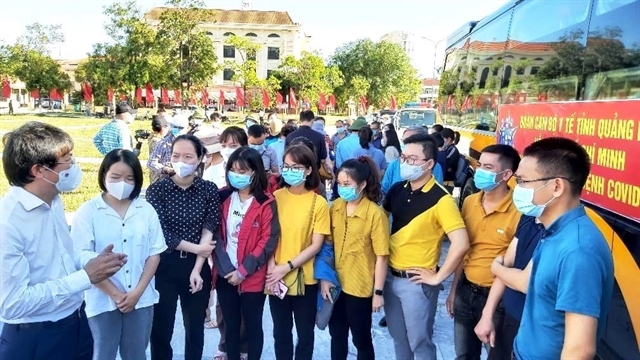 HÀ NỘI — HCM City has received 4,000 applications from medical workers from across Việt Nam, and 2,000 from volunteers, after a call was made for people with medical expertise in the city to help deal with the ongoing, severe COVID-19 outbreak.

According to the health ministry, nearly 4,000 medical staff – 700 doctors, 1,553 nurses, 78 technicians, nine other medical workers, and 1,629 medical students – from all over the country, have arrived in HCM City, taking on various responsibilities from working in COVID-19 field hospitals, treating seriously ill patients, to contact tracing in bid to "remove virus carriers from the community."

On Tuesday alone, two delegations from Hà Nội (one group from National Cancer Hospital and another from National Hospital of Obstetrics and Gynaecology) along with a working group from Việt Nam-Cuba Đồng Hới Friendship Hospital in the central province of Quảng Bình left for HCM City.

More delegations are on standby and ready to contribute to the COVID-19 efforts in the southern city.

Also, in response to the urgent call for assistance from Deputy Minister of Health Nguyễn Trường Sơn over the weekend as the local public healthcare system became overwhelmed, more than 2,000 people with a medical background in HCM City – experts, retired doctors, students, and teachers, etc. – in both private and public sectors registered to volunteer. The city's health department is urgently working on arrangements to deploy volunteers depending on their capacity to the city's districts in need of help.

The number is expected to continue to increase in the future, but still more human resources and materials are needed to help bring the city to normal life.

The southern economic hub is currently the epicentre of the country's fourth wave of infections, recording nearly 70,000 cases now with a daily increase of constantly over four-digits since mid-June. — VNS

6,000 medical workers from all over Việt Nam volunteer to help deal with HCM City's outbreak have 584 words, post on vietnamnews.vn at July 27, 2021. This is cached page on Talk Vietnam. If you want remove this page, please contact us.