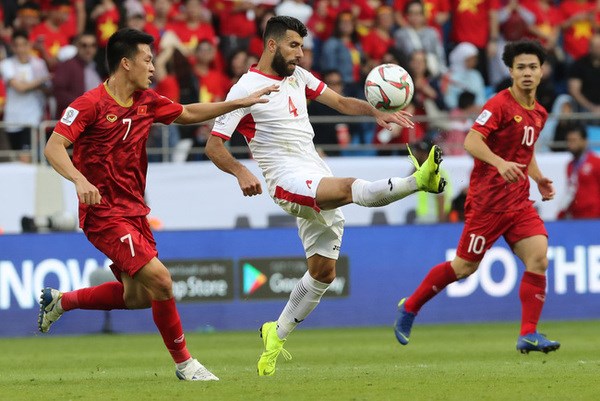 Members of Vietnam’s national team (in red) vie for the ball during a match (Photo: thethao247.vn)

Hanoi (VNA) – Vietnam will play a friendly match with Jordan on May 31 to prepare for the 2022 FIFA World Cup qualifiers in the United Arab Emirates (UAE).

Member of the national men's football team will leave for the UAE on May 26 and test for COVID-19 two days earlier.

Before its departure, the squad is set to convene a training session in Quy Nhon city of the south central province of Binh Dinh in a bid to climatise with warmer weather conditions.

It will also join a friendly match with newly-promoted Topenland Binh Dinh of the 2021 LS V.League 1.

All 45 players in the team received their first shot of COVID-19 vaccine on April 19-20 and will get their second shot in mid-May.

In upcoming matches in Group G of the World Cup qualifiers, Vietnam will take on Indonesia on June 7 and Malaysia four days later, and then wrap up the qualifying round with a game against hosts UAE on June 15.

Vietnam currently tops the group with 11 points, followed by Malaysia with nine and Thailand with eight. The UAE has six points, while Indonesia is yet to pick up any./.

Vietnam to play friendly match with Jordan have 243 words, post on en.vietnamplus.vn at April 22, 2021. This is cached page on Talk Vietnam. If you want remove this page, please contact us.